Occasionally I find myself reading books with such similar themes or elements that the reviews naturally group themselves together. Below, on the other hand, are two very different stories that involve swans. Not as metaphors for supernal grace and beauty but as aquatic birds with nasty tempers. When my younger daughter was five, we took a family outing in a park that had swans. Because it was spring, the swans had young cygnets. I cautioned my daughter to not approach them, and she was being very careful when a mother swan took umbrage and came at her, hissing, beak extended. Without hesitation I jumped in front of the swan. I remember thinking I didn’t want to use my fists because that would bring my face within reach of the swan’s beak. I stood up and aimed a round-house kick at the swan’s neck. I have no memory of actually kicking the swan (although family members assure me that I did), only the swan backing away, wings flapping, still hissing madly. Here endeth the first tale of swans.

The Glass Magician, by Caroline Stevermer (Tor). What a delightful tale, set in an early 20th Century world in which humans are divided into ordinary Solitaires, shape-shifting Traders, and ecology-minded Silvestri. The story focuses on Thalia, a magic performer, and her manager, Nutall, who’s acted as a parental figure after the deaths of her parents. When a rival stage magician gets them booted from their gig using a noncompete clause, their future looks grim. Then the rival turns up dead and Nutall is the prime suspect. To make matters worse, Thalia, who has always believed herself to be a nonmagical Solitaire, under the stress of a trick gone dangerously wrong, shape-shifts (“Trades”). Newly fledged Traders are not yet in control of their powers and become the prey of magic-consuming manticores. Now Thalia’s very life is at risk until she can master her magic, at the same time she’s determined to prove her mentor’s innocence and unmask the real murderer. The world and its characters are beautifully, charmingly drawn, with the effortless skill of a consummate storyteller.

There’s a lot of very cool stuff about stage magic, fine characterization, a murder mystery, and a slew of plot twists. The thing that impressed me most, though, was the subtle use of swan imagery.  Thalia Trades into the form of a swan, hissing in irritation at the unfairness of life when she’s not preening her feathers. But swans also appear here and there, like bits delicate, snowy down. 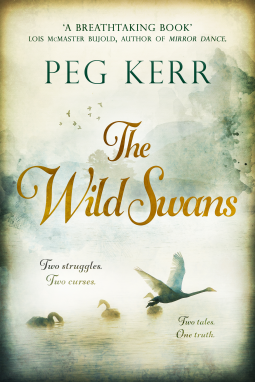 At first, I experienced a bit of disconnection in these two parallel stories: one, a re-telling of Hans Christian Andersen’s “The Wild Swans,” in which a devoted sister undergoes a terrible ordeal – about which she must remain silent – to free her brothers from an enchantment that turns them into swans by day, men by night; and a heart-wrenching coming-of-age story about a gay teen at the beginning of the AIDS epidemic. I found myself engrossed in Elias’s tale, which brought up memories of gay friends during that fearful time. The difference in my reading experience was partly due to my experience as a friend and ally, watching one after another of my friends become sick and die, remembering the atmosphere of fear and homophobia, the all-too-often rejection by families, and partly because in the Andersen tale, I knew what was going to happen. Since I was familiar with the story, I had no worries that Eliza, the sister, would prevail and that her brothers, once more restored to themselves, would rescue her from being executed as a witch. I didn’t know that not only would Elias’s lover, Sean, contract AIDS (and die), but that Elias himself would fall victim to the HIV virus. This journey, from Elias initially finding himself homeless after his family kicks him out for being gay, to meeting Sean and being welcomed into the gay and gay-friendly art and music community, to the evolving love story, engrossed me attention as it engaged my emotions.

For much of the book, I was puzzled as to the relationship between the two stories. There were a few obvious intersections, homophobia or rather hatred of homosexuality being one of them. It wasn’t until I closed the last chapter and mulled over the experience that I understood the deeper connection: Silence = Death. In order to break the spell, Eliza must cut, thresh, and weave nettles into shirts for her brothers, a long an excruciating process. I’ve brushed up against nettles, and the stinging is no joke (although to be fair, poison oak is worse). During that time, if she utters a single word, her brothers will remain swans forever. She cannot explain or defend herself, not even to save her own life.

HIV didn’t evolve because gay people hid who they were and whom they loved (for very good reason), but it flourished in an atmosphere of silence born out of fear. Eliza’s faithfulness arose out of love for her brothers, and the loyalty and solidarity of the LGBT+ community gave rise to movements like ACT UP that demanded action, and respect.

Part of the power of this story lies in the subtle resonances between fairy tale and contemporary tragedy. I say, “part,” because Elias speaks for himself. His story alone would have been an engrossing, heart-rending read. The juxtaposition of the Andersen story created a thoughtful, beautifully written pas de deux.

2 thoughts on “Short Book Reviews and a Personal Story: Three Tales of Swans”