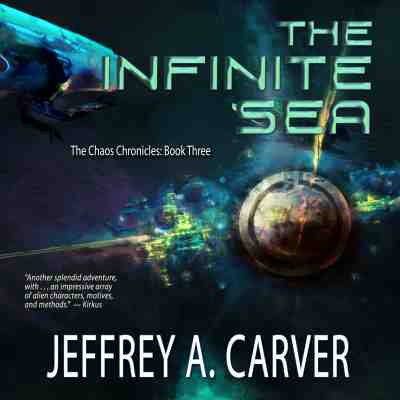 I didn’t start out thinking I would discount the entire Chaos Chronicles series in audiobook format. But when Chirp Books approved a special promotion on The Infinite Sea (just $2.99! right now!), one thing led to another. They suggested I steeply discount some of the other books in the series to keep the hoped-for wave of sales going, and I thought that sounded like a fine idea. By the time I was done, I’d put the entire series on sale! Even Blackstone Audio, which publishes the first book, Neptune Crossing, has graciously joined in.

That’s six audiobooks, all discounted at up to 80% off list price. All narrated by the incredible Stefan Rudnicki. Limited time, folks. Limited time only. These prices will never be lower!

If you’re not familiar with Chirp Books, it’s an audiobookstore owned by Bookbub, and they offer daily super-deals of really good books, just like Bookbub. Except in the case of Chirp, they actually sell the books, and don’t just advertise them. (You need the Chirp app to listen to them. But it’s a good app, similar to the Audible app. I use it myself, all the time, because I like deals on audiobooks.)

SNAP THEM UP NOW

Seriously, though, why am I doing this? With these discounts, I won’t make much on any individual sale. But it can help put these books into the hands (ears?) of lots of readers. And that’s the real reason. I want people to be able to download, and enjoy, the whole series without spending a fortune. And, I hope, the resulting momentum and reviews will spur further sales—and help me earn back the cost of producing these books within my lifetime.

So, if you try these books and you enjoy them, please do me the return favor of posting reviews. It really makes a difference!

By the way, probably because I’m out of my mind, I’m also applying a similar special promotional discount in the Apple store. So all you Apple purists, come on down!

While supplies last, limited time only!