As most readers of this blog know, I write a daily senryu (a haiku-like verse) and post it on social media. My purpose is to capture what’s on my mind each morning.

Back in March I wrote this one:

Productivity
is not the purpose of life.
Not civilized yet.

I am not a professional philosopher nor a religious leader, so my pronouncements on the purpose of life are strictly those of a lay person. But I do have opinions.

I have read excellent fiction of late from people who, in addition to writing complex and thought-provoking novels, do fascinating and important work in their day jobs. I’m extremely impressed by the ability of people like Malka Older, Arkady Martine, and Andrea Hairston, just to name three, to do great work in more than one direction.

The New York Times did a piece on Stacey Abrams this week that left me exhausted just reading it. She’s leading the important fight for fair voting, might run for governor of Georgia again, and is turning out novels while finding time to read work by others.

Clearly some people are able to be usefully productive in a lot of different ways at the same time. In the case of the people I mentioned, I hope they continue to do all the things.  END_OF_DOCUMENT_TOKEN_TO_BE_REPLACED 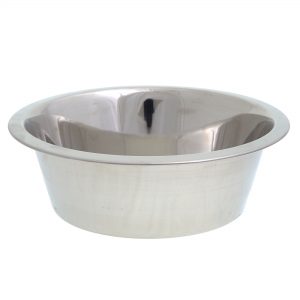 One of the preoccupations of our household for the last few months has been what to feed the Elder Statesdog.

Emily is now 15+, which is a substantial age for a mid-sized dog. And for 14 and a half of those years she has been an enthusiastic, occasionally rapacious, eater. That changed last summer, when she started picking at her food… and having GI problems with which I will not burden you. The vet prescribed a (very expensive) specialized low fat diet, which immediately put an end to the GI issues, and which she ate happily (with a side eye of “I was always hungry, you dopes. You just weren’t feeding me right.”)

Fast forward to the fall, when she began to disdain the new food. Rather than go back on her old diet (of which we had quite a lot–half a bag of kibble and a flat of the wet food) we started feeding her rice and canned chicken, about which she was quite enthusiastic. And that lasted through… about the end of the year? At which point she decided that that wasn’t any good either.

How does Emily show her displeasure? She snouts: which is to say, she gestures with her nose all around the bowl, as if she were trying to bury the bowl and its contents. This spring there has been a whole lot of snouting going on. 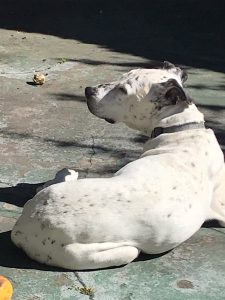 So the feeding frenzy has been ours, not hers. She may not be skin-and-bones these days, but she’s very skinny. So we’ve gone back and forth between the old food, the new food, rice and chicken, egg-and-hamburger, and some days, a steady diet of treats, just so she has some calories in her. She thinks the all-treats-all-the-time diet is just swell (she particularly likes the supermarket brands–the fancier desiccated liver or reindeer shreds from the pet store are okay, but she’s a Milkbone/Beggin’ Strips girl at base). So she’s getting them. And getting spoiled, and why not? She’s a 105-year-old Moldavian Leaping Dog.

We’re not going to be able to keep Emily going forever, we know that. She has cataracts, she’s rather deaf, and if she stands anywhere for more than a minute or two, her hind quarters begin to sink toward the ground as her muscles fatigue. Yet, if we take her out of a walk she still wants to chase a ball–a few times, anyway, before she stands with the ball in her mouth, looking at me as if I’m the Idiot.  She’s a very old dog. And we have decided that whatever makes her happy and keeps her comfortable is what we’re feeding her. The vet concurs.

An Australian prime minister got into much trouble for quoting (many, many years ago) that “Life wasn’t meant to be easy.” We’re so busy focussing on the big picture and the life-threatening health issues that sometimes the small pass us by. I’m a constant reminder to others that the small is also important. And that life is not always easy and it’s seldom simple or straightforward.

I turned sixty on 25 April, and had a good (but small and quiet) birthday. I wanted to do All the Things, but pandemic is pandemic. It’s just as well I wasn’t impossibly ambitious because I had a bit of an infection in a joint on my right hand. It became quite severe very quickly and I’m still on antibiotics for it. Today is the first day I’ve been able to type anything that long since then. Everything hurt, including sleep.

That’s my reminder. Turning sixty is no big deal. Ignoring a sore finger can become one, if one doesn’t take care.

I needed the reminder, because around me all kinds of people have moved back into normal life… and I can’t do anything like that until I’m vaccinated. I receive my first shot on 21 May.

I’ll be very busy the next few days, for I have until Friday to catch up on everything delayed due to the hand-that-would-not work. I can’t put any of it off, for the edits of a novel are about to come through. The novel was delayed by pandemic ramifications (it affects our lives in so many ways) and I’m really looking forward to seeing what a US editor makes of my Australian voice. So I’m going from bad to wonderful, via a busy path.

Today was an in-between day. I was well enough to do an hour’s work and three hours of meetings. The rest of the time I complained at people, obtained more medication, and told everyone “May the Fourth Be With You.” I watched a bit of Star Wars, for it seemed the right thing to do.

I started writing this after midnight. This post, then is my first step towards much writing of various kinds.  In fact, you are the first readers of anything more than two painful sentences in nine days.

I’ll report back in a fortnight and let you know how everything went. In the meantime, don’t do what I did! If something hurts and you have no idea why, take it to the doctor as quickly as possible.

Because of the pandemic, I planned to celebrate my birthday for as long as it takes. I’ll start again when I stop hurting. Soon. Very soon.

Our prime minister complained for the rest of his life that we’d all missed the critical second part of his quote. Malcolm Fraser had paraphrased George Bernard Shaw and was trying to tell us all that life could, nevertheless, be delightful. Like my birthday. Like seeing friends through Zoom. Fraser made a tactical error in assuming that the press cared about communicating the second half of his quote but right now… his idea wasn’t far removed from my everyday.