One of these things is not like the other.

Generally I have two books going at any given time: one on my phone (for reading when I go to and from work) and one paper-based book at home for reading when I have a moment (mostly but not always before bed). And generally they’re fiction–unless I’m researching something or a book catches my eye. Two books caught my eye recently: I just finished The Great Influenza, by John M. Barry, and The Furious Hours: Murder, Fraud, and the Last Trial of Harper Lee, by Casey Cep. They made for very interesting co-tenants in my head.

I have always been fascinated by pandemics, medical history, and public health stories–yes, even before COVID took over our lives. Barry’s book, which is big and comprehensive, covers not only the origin of medical science in the US (it’s hair-raising to learn how recently many “doctors” didn’t actually study medicine, and those who did never saw patients or studied anything as rarified as anatomy) but the context–politically, socially, and scientifically–that allowed the 1918 pandemic to wreak the kind of havoc it did. Conventional wisdom says that the toll of the pandemic was 20 million deaths–a number from a report issued shortly after the pandemic; in fact, the current thinking is that there might have been 20 million deaths on the Indian subcontinent alone, and the estimate is somewhere between 50-100 million deaths worldwide.

It’s not unfair to say that Woodrow Wilson owns some blame for the toll the influenza took in America: having finally committed the US to war, it became a matter of almost religious importance to him, and he used the US government to crack down on anything that might damage American morale and the will to win. And nothing damages morale like a pandemic that might get in the way of, say, selling war bonds (Philadelphia, already showing signs of influenza-based devastation, refused to cancel a massive war bonds rally, which became a superspreader event, with predictable and deadly effect). And then, as now, communities which had done well in keeping the numbers low to start fell victim to pandemic-fatigue later, and watched the numbers climb.

The Great Influenza is, of course, sobering in our current reality. It has a new afterword written in January, 2021 which draws comparisons (in which, frankly, COVID still comes in as less deadly than the 1918 influenza). To me the crucial message comes at the end of the book: “the final lesson of 1918, a simple one yet most difficult to execute, is that those who occupy positions of authority must retain the public’s trust. The way to do that is to distort nothing, to put the best face on nothing, to try to manipulate no one.”

It would be nice if we could carry that lesson forward to the inevitable next pandemic. 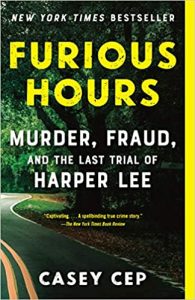 The other book I justfinished is Casey Cep’s The Furious Hours. Which I enjoyed… but which didn’t quite land for me. Is it about Harper Lee? Is it about the true-crime case she followed in hopes of writing a book? It’s both, but Lee’s problem becomes Cep’s problem… and what do I mean by that?

Okay: in the 1970s Harper Lee learned of a murder case in Alabama, not too far from her home town of Monroeville: a man named Robert Burns had shot a man named Willie Maxwell–because Maxwell, often referred to as the Reverend (yes, he had been a preacher) was generally believed to have killed his first wife, his neighbor, his second wife, his brother, his nephew, and finally, his adopted daughter Shirley Ann–all for multiple insurance payouts. Each time he was tried, and each time he was exonerated. Among their community there was a belief that Maxwell was practicing voodoo; but even with insurance policies he had taken out on each of the deceased, there was not enough evidence to convict Maxwell. He and all the victims were Black, as was Burns, a neighbor who had finally had enough and at Shirley Ann’s funeral shot Maxwell in the head. To make it all that much more, um, colorful, the white lawyer who had defended Maxwell on his earlier murder charges and fought for his insurance payouts, defended Burns and got him acquitted.

Lee became fascinated with the idea of writing a true-crime book about the case. It was over a decade since the publication of  To Kill a Mockingbird. She had been writing feverishly since then… but producing nothing. The weight of having written a book so immediately beloved (and made into a beloved film with Gregory Peck playing a filed-the-serial-numbers-off-it version of her father A.C. Lee) must have been crushing. Everyone expected another book, another work of fiction, and I can only imagine the withering effect of all that expectation. So the Maxwell/Burns case must have not only piqued Lee’s imagination but her desire, her need, to produce something.

She certainly knew how to do the research (she gone as Truman Capote’s assistant when Capote was researching In Cold Blood–among other things, the people in Kansas found Nelle Harper Lee far easier to talk to than Capote) and the case was, to say the least, fascinating. She spent a lot of time in Alex City (the location of the crime), talked to everyone she could, made life-long friends with Tom Radney (the liberal politician and lawyer who had been Maxwell’s lawyer and then got Robert Burns acquitted of murder). Lee–charming, but a hard-drinking, chain-smoking rebuke to the image of a Southern Lady–became a fixture in Alex City for a while. Then she went home to write the book. Or struggle with it, anyway.

No such book was ever produced, although she told a number of different people that she was variously working on it, nearly finished, revising it, had a full manuscript… Finally she stopped answering inquiries about how it was coming.

What happened? Part of the problem seems to be that there was no resolution, no facts, no there there. Lee talked to everyone, but the same problem juries had with Willie Maxwell–a lack of concrete evidence–became a stumbling block for her. Everyone had an opinion, everyone “knew” what happened but no one could prove it. Another part of the problem? There was no hero, no protagonist. The main characters in Willie Maxwell’s story were all Black, and I think this was a community whose problems she couldn’t entirely fathom. It would have been easy to make Tom Radney the protagonist (Cep makes a good case that Radney saw himself that way) but that got away from the actual core of the case. Did Willie Maxwell kill all those people?

And here’s the problem with Cep’s book, for me. I think Lee herself is a heartbreaking character: you publish To Kill a Mockingbird in your 30s, then you spend the rest of your life living under its shadow, trying to write something that lives up to it. And I think the Willie Maxwell case is fascinating. But in both cases, there’s not enough there there. The thing that seems to have ground Lee to a halt–the lack of answers, the lack of resolution, actual facts about the why and the how–feels very much like the problem with Cep’s book. We see everything about Lee from outside, and she played her cards very close to her chest. There are no answers–you see what happens to the rest of Lee’s life, but I feel like I was left on my own to imagine the effect of the Maxwell case (and her inability to finish that book) on her.

I can recommend The Furious Hours as a good read, but I didn’t find it a satisfying one. For that, as odd as it may seem, I return to The Great Influenza, stuffed full of fact and conclusion.