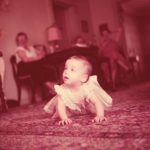 This post was written several years ago and published elsewhere.

A book is like a child: grubby, ill-behaved, beautiful, beloved.  Often all those things at the same time.  You finish a book and send it off into the world with the fervent hope that strangers will be kind.  Editors will not only recognize your baby’s beauty and charm, but will see past that unfortunate haircut and the scabs on her knees, and will want to teach it manners and perhaps pay for the braces and ballet lessons that will allow your child to be as loved by The World as she is by her parents.

Sick of this metaphor yet?  The thing is, even the best parent artist has blind spots.  For that reason, you rely on editors.  And art directors.  And book designers and proof-readers and on and on.  But even those folks can get, um, blinded by their own involvement.  The result can be a bad edit, a horrible cover, a well-intentioned marketing effort that appears to be aimed at an audience from Mars.

About a dozen years ago a friend of mine had a book published.*  I got to read it in manuscript, enjoyed it, and gave him all the encouragement of a friend and colleague.  And then the book came out and–there is no way to say this delicately–it had one of the worst covers I have ever seen in my life.  The figures were so badly rendered as to raise questions about what species they belonged to (this was neither SF nor Fantasy, and the figures in question were supposed to be human).  The colors of the painting were at war with the title type.  Oh, and the title was in a typeface so tortured that it was pretty much indecipherable.  It was a veritable trifecta of cover disasters.  And my friend showed me his book with the sideways glance of a parent who adores his child but is afraid that someone else might not quite appreciate its specialness.

In all other respects it was a well-produced book: the binding was solid, the printing good, the book design simple but well done.  I saw no large swaths of type set upside down or in Cyrillic.  Yet when I closed the book, there was that cover again, like something leaping out at me from behind a door.  I turned the book over and read the back cover copy.

He nodded.  “The photo didn’t come out too bad, either.”  (This was the author photo on the back flap, which had been the subject of some discussion between him and the photographer, aka his girlfriend.)

“Very handsome,” I agreed.  I flipped through the book again, found a passage I liked, read it, smiled, handed the book back to him–front cover still turned away from me.  “I hope it sells a million copies.”

Should I have said something about the cover?  The book was in print, was already in bookstores.  Would it have helped him if I’d said, “Dude, what were they thinking?”  And yet I walked away feeling like a coward.  Wouldn’t a true friend have told him the truth?

No, I don’t think so.  It’s not just that no one wants to think his baby is ugly. No one wants to feel that he’s let strangers dress his kid up in a clown suit and leave it sitting on a street-corner to fend for itself.  In the end, you can take the clown suit off the kid and her beauty and star quality will still be there.  And the last time I was at his house, I noticed that the dust jacket of the copy of the book on his brag shelf had mysteriously gone missing.

*for reasons that may be obvious, I have fudged the details of the book to protect the innocent.  But the fundamentals of the story are true.