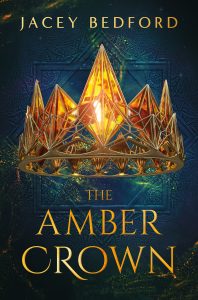 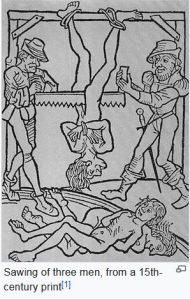 Accounts differ, but sawing, with a two-handed saw, could be across the body, or lengthways down the body starting at either end. The medieval illustration in Wikipedia shows that they tied the victim upside down on a frame, legs apart, and then began to saw them in half, lengthways, starting at the crotch. The theory was that because they were upside down the blood drained towards the head and so they didn’t bleed out, or pass out, quickly, but stayed alive and screaming while being butchered like an ox. It’s hideous, so I reserved it for traitors and king killers. In The Amber Crown it’s a character we haven’t met who suffers this fate, so it’s not as personal as if it’s a character we’ve already become invested in, though, sadly, it is an innocent man. END_OF_DOCUMENT_TOKEN_TO_BE_REPLACED