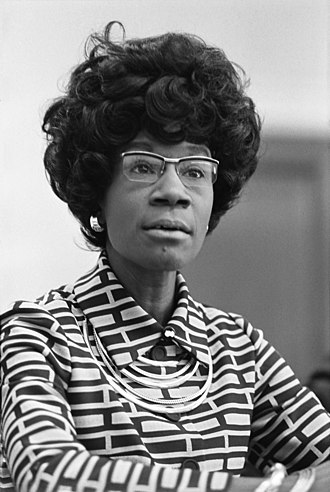 The first vote I ever cast in a presidential election was in 1972 for Shirley Chisholm.

That wasn’t in the general election in November (where I voted for George McGovern as any reasonable person should have done). It was at my precinct caucus in May, back when Texas (and most states) chose political candidates using caucus and convention systems rather than primaries.

At the caucus, you picked the candidate you supported, and then the precinct workers tallied the votes to see which candidates had enough support to go to the next round. Alas, I was the only person who signed in for Chisholm, and one vote wasn’t enough for the next round.

I could have gone home, but instead I switched to McGovern, and ended up going to the county convention as a McGovern delegate. Still, the first time anyone ever officially asked me who I wanted for president, I said Shirley Chisholm. I remain proud of that.

1972 was a big year for me in electoral politics. I went to the statewide Texas Democratic Convention as a reporter that summer. One of the things I remember about that convention is that I, a hippie and not even a delegate, was one of the few people in the hall who knew the words to “Texas, Our Texas,” the state song. (No, the state song is not “The Eyes of Texas,” which is the school song of the University of Texas and was originally written as a parody using a tune from minstrel shows and is now mired in controversy because of those roots.)

But that wasn’t the first time I paid attention to presidential elections and the convention process. I was still a little kid, but I remember watching the conventions and staying up all night listening to returns during the 1960 election. In 1968, having worked a little for Eugene McCarthy (I was in the parlance of the time, “Clean for Gene”), I watched on TV with despair as the police rioted in Chicago to block demonstrations at the Democratic National Convention.

On Wednesday night, as I listened to speeches from Hillary Clinton, Elizabeth Warren, Barack Obama, and Kamala Harris, I found myself harkening back to the 1964 Democratic National Convention and the Mississippi Freedom Democratic Party.

In 1964, the Mississippi Democratic Party was still in the hands of white supremacists (they started moving to the Republican Party after that year) and they had prevented Black people from participation in their process. The Freedom Democrats put together their own convention slate and went to the national convention in Atlantic City to fight for their right to represent the state.

Fannie Lou Hamer was one of the leaders of that delegation and spoke powerfully. However, several southern delegations threatened to walk out if the Freedom Democrats were given any votes and Lyndon Johnson made sure the convention didn’t get to vote on the issue because he wanted “unity.” The party offered two non-voting at-large seats to two of the men in the group, but the Freedom Democrats rejected that.

They lost at the convention, but in 1965 Johnson pushed through the Voting Rights Act (now sadly a shadow of its former self due to bad Supreme Court rulings).

As I listened to President Obama invoke the memory of the late John Lewis, to Senator Warren and Secretary Clinton talk about the trouble we’re in and the policies we need, and to Senator Harris accepting the vice-presidential nomination, I realized that the Democratic Party has come quite a way since 1964.

It’s easy to argue that they should have come quite a bit farther, but when you look at the way the Republicans have devolved — their 1964 nominee Barry Goldwater, considered an extreme right-winger, would be too “liberal” for the current party — it’s possible to appreciate the fact that the Democrats have changed in some very good ways.

It was also great to hear the Democrats condemn the criminal in our White House in no uncertain terms. As President Obama made clear, this election is about the future of our democracy.

Right now it’s our job as citizens to make sure there’s a fair election, something that is by no means assured. And it’s our job to vote.

But our job doesn’t end there. Our country is in chaos and even if we manage to get the pandemic under control, we aren’t going back to the old normal. True, the pandemic shows us how important it is to have effective government at all levels, from public health departments to the Centers for Disease Control, and electing Joe Biden and Kamala Harris will take care of that problem on the federal level at least.

But we’ve still got to have a government that is working effectively to do something about climate change, about income and wealth inequality, about racism and misogyny, and about many other weak spots in our democracy that have been laid bare by the people who have been trampling on the country for the last four years. We need to elect the best people we can and then hold their feet to the fire every day of their terms.

After the Constitutional Convention in 1787, Benjamin Franklin was quoted as saying we had “A republic, if you can keep it.”

It’s time to make sure we can keep it.