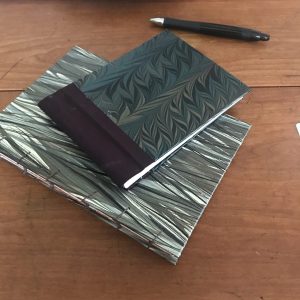 It’s the holiday season, or so I’m told. I have signally failed to organize present-giving this year–to the point where my husband and I were yelling “I dunno, what do YOU want?” at each other from different rooms Saturday afternoon. The one thing I have done is to make some books as gifts. This is utterly self-serving: I found a couple of bookbinding projects that I wanted to do, and thought: who would like the end project? And there you go.

I am not a bookbinder. I have very few of the tools (I do have a bone folder, which is a multi-use tool and utterly invaluable). I have ambition but no indurated skills. And yet. I work in a museum of bookbinding, I know enough to talk about the history and craft, and sometimes the urge to make something with my scanty knowledge overwhelms. And Hey!, it’s the holidays! 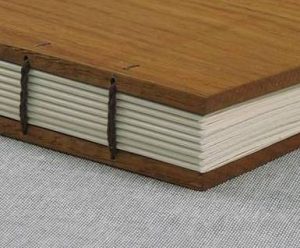 I made a coptic-bound journal for my daughter, and a flip-back sketchbook for her husband (seen above). Coptic binding leaves the spine exposed, with lines of kettle-stitching binding the signatures (folded stacks of paper) together. This photo gives you an idea of what it looks like, if you are far more skilled than I, and attach wooden boards as your covers rather than lashing over cardboard boards.

The flip-back sketchbook, though, is a real challenge. I’m making two of them, and it’s a complicated-enough process that it has been inserting itself into my dreams. Does anyone else do this? Find themselves rehearsing a process in their sleep? No? Um, okay. But I woke up this morning and tipped on endpapers to the signatures for the second sketchbook, because I’d been dreaming about doing it. 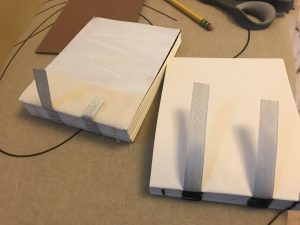 Also because I had prepped a text-block, sewn it together, and THEN realized that I hadn’t added the supporting structure or endpapers. What supporting structures? See the bit of cloth on the top of the left-hand text block? That gets glued to the inside of the cover and adds strength (the other edge of the cloth is tipped on–glued on the inside edge of that first signature. There’s one just like it on the other side. You can see how having that additional support is important.

And endpapers? Aside from being pretty and covering the bare inside of a cover, they’re attachments to the cover. So you really can’t skip those either. I could add endpapers to the done-wrong text block on the right, but it will never be quite properly made. So it was worth it to me to make a new text block, tip on the fabric support and endpapers, then sew. 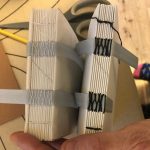 I used a lighter-weight thread this time, as you can see. The left-hand text block is the keeper.

If this seems like a finicky process, it is–although the measuring and making of a case (a cover that is not sewn but glued on is called a “case”) with a front cover that will flip back is really fussy. So why, other than to make holiday presents, do it? In part because the mechanics of the thing fascinated me. And if I get it right, maybe I’ll never do it again. If I don’t quite get it right? Well, then, I will probably dream about how to do it, and wake up and try again. I’m funny like that.

Whatever you’re doing, may your days be filled with increasing sunshine, your holidays, if you celebrate them, warm and bright, and may the year ahead be healthy and constructive and happy for all of us. See you in the New Year.