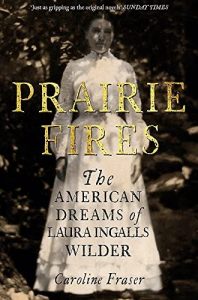 I just finished reading Prairie Fires, a biography of Laura Ingalls Wilder, which I recommend highly. The author of the eight Little House books, she wrote about her childhood during the push west by homesteaders and farmers. “I told the truth,” she said. “But not the whole truth.” The books are a “good parts” version of her life, but some important “truths” were omitted, because Wilder (and her daughter Rose Wilder Lane, who was her secret beta reader, line editor, and editorial advisor) took out things that didn’t underscore her narrative. The narrative? That her family (in particular her adored father, Charles Ingalls) survived and flourished through hard work, love, and self-reliance, and that self-reliance, a core virtue of westward expansion, is a uniquely American virtue.

This is a weird time in American history to be reading this book, let me tell you.  The message Wilder was crafting seems to me to have curdled, fueling rage and insurrection. Rose would have loved it.

The truth about self-reliance in Wilder’s childhood is very mixed. Wilder’s father never managed to support the family by farming: he was a hard worker and strove mightily to keep the family fed (they came close to starving more than once), by doing non-farming work to get by–working as a clerk, as a deputy, as a railroad paymaster. Which meant that the actual farmwork often fell on his wife and daughters. It wasn’t entirely Charles Ingalls’s fault–fire, locusts, and drought all worked against making a go of it for most homesteaders. But Ingalls had also started out as a homesteader–as many people did–with virtually no money, no reserve against disaster. And the disasters kept on coming. So he kept moving the family, and moving it, and moving it, not because he had a “wandering foot,” but because debt and failure overwhelmed them.

In making a case for self-reliance, Wilder elides over the significant degree of neighborly assistance her family gave and received–in one case insisting (facts to the contrary) to an editor that her family’s farm was sixty miles from the nearest neighbor. Services were often given to them with no realistic hope of payment. And on more than one occasion the family relied upon government assistance in the form of food (one could also argue that the Homesteader Act was a massive assistance program).

Wilder and her husband Almanzo had similar luck as farmers; the first few years of their marriage were brutal, and they ultimately moved from South Dakota, where her family lived, to Missouri. Their farm there wasn’t self-supporting–they did other work too. Wilder (who didn’t start publishing fiction until she was in her 60s) was for many years the secretary treasurer of a federal farm loan program (subsidized, low-interest loans), and wrote columns for women’s periodicals.

It’s not surprising that Wilder was conservative. Or that she valorized the experience of her childhood (and disapproved of anyone whose experience was different), and increasingly believed that children and their parents were losing the sturdy pioneer virtues of cheerfulness and (say it with me) self-reliance. Her daughter Rose Wilder Lane, on the other hand, appears to have resisted any restriction–parental, editorial, societal, or governmental–from her childhood onward. Her life, and her relationship with her parents, is an odd mix of victimhood and a child’s enraged cry, “You’re not the boss of me!” If Wilder had a narrative, Lane had an agenda; anything that gets in the way of doing what you want must be opposed. At the top of your lungs. So maybe it’s not surprising that Lane’s book The Discovery of Freedom is considered one of the foundational texts of the Libertarian movement.

If Wilder thought the government was meddlesome, Lane believed the government was the enemy. And that’s why being in the middle of Prairie Fires on January 6th was so… troubling. All those people who came to Washington, DC convinced that the government itself was the enemy. I heard an interview with a guy who drove up for the rally; he kept saying “I don’t need nothing from this government. Not a damned thing! People gotta learn to rely on themselves.” The roads he drove on, and seat-belts in his car (even if he doesn’t wear them, they’re available), and bridges he crossed are magic, there when needed but otherwise invisible.

The Homestead Act, and food assistance, and low-cost farm loans were invisible to Wilder. Lane saw (and ranted about) all of the government attempts to mitigate the calamitous effects of the Great Depression and the Dust Bowl. She saw them, and believed they were meant to enslave the populace. “I don’t need nothing from this government. Not a damned thing.” Until you do.

2 thoughts on “Narrative and Agenda”