How to Become a Planet, by Nicole Melleby (Algonquin Young Readers) 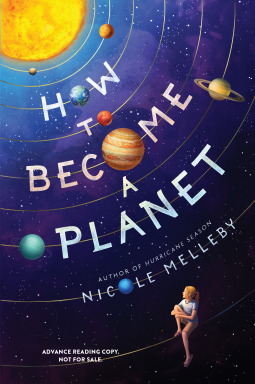 Fourteen year old Pluto is an engaging youngster, as passionate about astronomy as she is puzzled by the changes in her life and herself. Within a short period of time, she’d gone from a happy science geek who hangs out with her best friend on the boardwalk where her divorced mother runs the family pizzeria, to a stranger in her own skin. Sometimes she’s paralyzed with the blues, unable to even get out of bed, and the next she’s caught up in senseless fury. It’s as if the mood swings of normally hormonal adolescence have been amped up to pathological proportions. Even with a supportive mother, a psychiatric diagnosis complete with medications and a recommendation for psychotherapy, and a novel way of using astronomical concepts as metaphors for what she’s going through, Pluto is drowning. Not only is she progressively alienating everyone she cares about, she’s stopped caring. Only when her rich city father ramps up the pressure for her to live with him does she formulate a desperate plan: a list of all the things she must do in order to stay at home.

Visit the planetarium with Mom.

Go to Former Best Friend’s Birthday party… and so on.

The list, Pluto believes, will prove that she can return to her old, “true,” “normal” self. But things don’t go as planned. As Pluto embarks upon her tasks, they become even less within her reach. The summer takes one unexpected turn after another.  The tutor whom Pluto was sure she’d hated turns out to be a sympathetic ally, and a new friend with a checklist of their own has a secret Pluto can sympathize with.

Society tends to “other” people with mental illnesses. Historically, they were seen as possessed by devils or cursed by angry gods, as witches, or as eccentric, lazy, or selfish. Treatments ranged from trephination (drilling holes in the patient’s skull), to exorcism to locking the mentally ill in horrific prison-like asylums. Even today, when effective treatments allow many, even those with serious diagnoses, to lead functional lives, the stigma persists. All too often, the person is seen only as their illness, and their insights and contributions therefore dismissed as invalid. Young people are particularly vulnerable to public shaming. It’s hard enough for even “normal” teens to figure out who they are and what they want in life. How to Become a Planet focuses on Pluto as a sympathetic character, a person who is both resourceful and overwhelmed, insightful and confused by changes in herself. Her use of astronomy metaphors is particularly vivid and powerful. Above all, Pluto is a person whose brain chemistry isn’t working quite right, not a diagnosis, and this excellent novel showcases her journey toward a new balance in her life.

As for my personal reaction, I must confess that, although I am an older adult, I gobbled up this book. Pluto’s voice was so compelling, and her struggles so resonant, that the story connected with me on a deep level. Although I did not suffer depression as a teen, I struggled with PTSD as an adult. The times Pluto absolutely cannot motivate herself to engage with her day were chillingly familiar. And, just as Pluto took small steps toward understanding her “new normal,” that’s how it went with me. Besides skillful therapy and appropriate psychiatric medicines, unexpected acts of kindness and new friendships as well as old carried me through the dark times. Pluto comes to accept that she is now and will forever be different from who she was before. I can never go back to the person I was before my own trauma. But I can heal and grow and live a fulfilling life. I wish the same for Pluto. She’s made an excellent start.