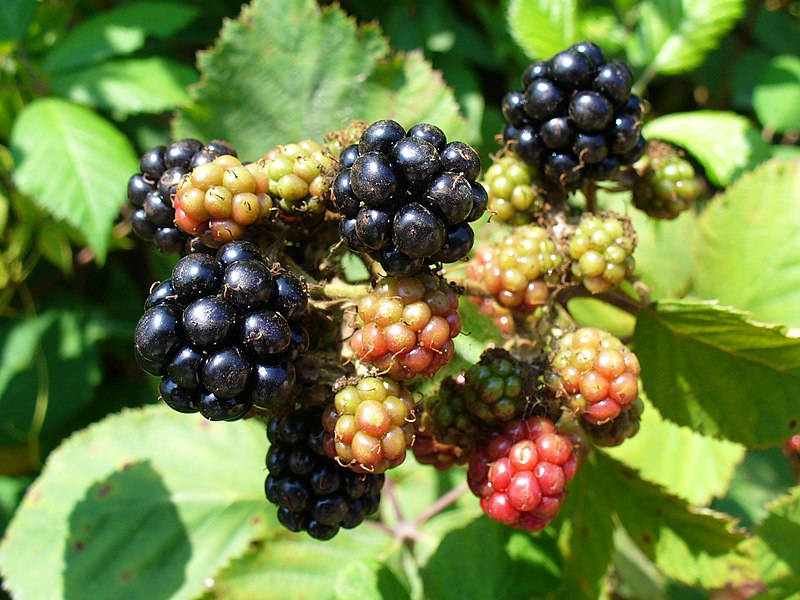 It’s blackberry season, and as is my custom at this time, I went out this morning to pick from the brambles along our little country road. (We have our own patch, but the berries ripen later because it’s in a shadier place.) I try to do this early, when it’s cool and I’m not having to squint into the sun for the higher branches. As I picked, I thought about the story I’m working on (and currently stalled on 2 scenes-that-need-more), and also writing in general.

Blackberries are tricksy things. They can look ripe from where I stand, but turn out to be all red at the base. Sometimes I can tell the moment I touch the berry — it’s too firm and too tightly attached to the stem. I have to be ready to give up on what looked like a great prospect and move on. When I’m in the flow of picking, it seems I don’t even have to think about this. Isn’t this like a story that seems promising but doesn’t yet have the necessary depth? Occasionally — well, more than occasionally — my mind gets set on “this berry must get picked” and I force the issue. I’ll glare at the red parts and pop the berry into my mouth (“for private reading only”). Berries that are almost-ready go well in oatmeal. I freeze quarts and quarts of them for winter breakfasts. They’re too sour on their own, but they blend well, adding pleasantly tart notes. That’s not unlike taking several different story idea, none of which can stand on their own, and setting them at cross-purposes to make a much more interesting tale.

This whole business of “readiness” in a story is a curious one. It’s a bit like cooking without a recipe, because while there may be guidelines, there are no hard and fast rules of how to tell when a story concept is “ripe.” All too often at the Big NYC Publisher’s Office, after rejecting a work – especially if it was (a) slush and (b) got the standard slush reject letter, which was polite but clear that it wasn’t something they were interested in — the beginning writer would respond. Now, professionals know that, unless you are specifically invited into an exchange, you don’t respond to a rejection.  You take it, you consider what’s worth considering, and you move on.  That exchange is over.

Occasionally the appropriate response is to to ask for more details, keeping in mind that time-crunches didn’t allow the editor to do that in the first place.
More often, though, the editor gets a response along the lines of “My work is utter genius, and you’re too blinded by (fill in the blank) to see it!  But you’ll be sorry!”

I think this kind of reaction isn’t limited to beginning writers, but it is a particular trap. It’s far easier to think that your story got rejected because of the blindness/stupidity/conspiracy/conventionalness of the gatekeepers, rather than that it simply isn’t good enough. It could be a great idea and you weren’t ready to do it any kind of justice. It was a trivial idea that no one could have turned into a decent story. It could have been a nifty idea but it wasn’t developed, it wasn’t “ripe.”

One of the hardest things for a new writer to understand is that there is a threshold of quality — for ideas, for execution — for publication. It’s so hard to hear that the story you are so proud of isn’t good enough. Those thorns hurt as much when I’m pulling out as when I’m pushing in.

And here’s the catch: sometimes the story really is great. Sometimes the market just isn’t ready for the story at this time, but it will be in the future. Somewhere there’s an editor and a readership who will adore it. How can you tell?Experienced writers usually get a sense of whether a story is a passing musical tone, more valuable for where it gets you than for itself, best set aside as an interesting but unsuccessful experiment, or whether it is worthy of continued confidence. I can’t say no beginning writers have this maturity of perspective, but I think it extraordinarily unlikely. It comes with trial and error and constant critical attention to the work. It comes with patience, and offers more patience as the payoff.

So what is a beginning writer, or a middling writer, or any writer, to do? Here are some immediate thoughts, but everyone’s solution is going to be different, and to change with time.

Get lots of support, people who share a vision of a career as being long-term, hopefully life-long. While striving to make each new project the best you can, keep perspective. Yes, there are “break-out” books, but what makes or a breaks a career is steady improvement. Most of us, on occasion, need shoulders to cry on, hands to hold, friends to celebrate with, colleagues with contagious enthusiasm for writing itself.

Beware the lure of self-publishing. It definitely has its place, but it ought not to substitute for inadequate quality by providing a way around the traditional gatekeepers. While it is remotely possible that an early work might be not right for today’s larger market but perfect for a specific, smaller readership (and hence a good candidate for self publishing), it is far more likely it simply hasn’t passed that threshold. Assume it hasn’t. Work harder, write better, keep pushing your critical skills and your standards.