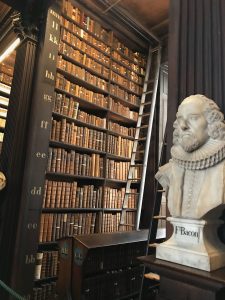 It started because of unspecified rodents. The inspector who came to check for termites found none (sigh of extreme relief) but did find evidence of rodents of some sort, and gave us a plan for dealing with same. Heigh-ho for the life of a property owner. So we intend to follow through with Operation Bye-Bye Templeton, but that meant that first we had to box up the books in the three bookshelves that stand in the way of the technician getting in and doing his work.

The bottom row of two of the bookshelves were record albums my husband has been trotting around with him since his teens and 20s (and a few albums I had been trotting around ditto, which were obscure enough that I didn’t think anyone would ever bother to bring them out as CDs or MP3s). The rest of the bookshelves were–double shelved–some of the books I have trotted around with me, and added to, since I was in high school. Books have always been a kind of comfort and emotional insulation–as if they, and the stories or information they contain, could keep me safe in an uncertain world. If this sounds familiar to you, feel free to hum along.

Anyway: I made a project for myself: fill a banker’s box of books every day until the shelves were emptied. Fifteen banker’s boxes later, the shelves are empty. But a weird thing happened on the way to the end of the project. I began to wonder why I have all these books. Not the research ones (although I’ll confess that I’ve never yet had a direct need to know about Scots clan tartans, it might come up, and I have a resource) but the SF paperbacks bought from the spinner racks at the Rexall Drug in Great Barrington, MA, when I was in high school, the gothic romances, the paperback Georgette Heyers, plays and other books that I read for college courses, my mother’s vast collection of 20th century short fiction… And so few of them, in the words of Marie Kondo, sparked joy. Or at least a desire to re-read them. What is weirder, I didn’t have the strong sense of comfort that seeing books on my shelves has always given me.

It felt like a re-defining moment. I have, among other things, defined myself by being the one who read; even in a family of avid readers my book addiction was part of my identity. I carried boxes of books to college, and then to my first and successive homes, adding to them. When we sold our apartment in New York preparatory to moving to San Francisco, I was stunned when the realtor told me that the built-in book-cases we had put in the dining room were not a selling point (“buyers get intimidated by too many books.” Seriously). So I’m looking at the fifteen bankers’ boxes of books I took down from the shelves and thinking… maybe I won’t be putting all, or even most, of them back.

It feels like a betrayal. But it also, weirdly, feels like a relief. Like letting those late ’60s-early ’70s SF books go is letting go of the heedless “will read anything with words” reading habits of my teens, and jettisoning my vast collection of gothics (those romantic suspense novels which invariably featured a woman in a diaphanous dress fleeing from a brooding mansion) suggests that maybe I’m not concerned with whether I would ever experience love/romance (after 30+ years of marriage, I suspect that question has been laid to rest). Many things in my life have changed.

It’s apparent to me that my uncritical amassing of books has become more critical. Where I used to define myself by the sheer number of books I read and held on to, maybe I’m defining myself a little more by which books I want to keep now.

It’s interesting to look at those boxes of books and realize that it’s still possible to define myself. Or, as it happens, redefine myself.