It’s always amazing and heartening how much inspiration we can draw from the next generation, whether they are our own children or someone else’s. In my personal life, my younger daughter dragged me, kicking and 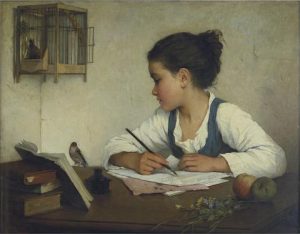 screaming, into the world of social media, into getting my first stupidphone, and later into video chatting (during her  years of medical school on the other side of the country). Now these technologies are part of my everyday and work life. They’ve saved my sanity during the pandemic.

I think it’s good to keep learning new things, to use our minds and bodies in different ways. One of the challenges of these new computer-based technologies is that they require us to use different methods of thought. The transition, for example, from keyboard-based word processing programs (like WordStar for DOS, the one I first used) to graphics-based (Windows) programs entailed a different logic and hand coordination. And both of them are a far cry from the typewriter I used to write my first published stories.

My very first stories (actually, my first umpteen attempts at novels) were written by hand in composition books or on scratch paper. I remember reading an interview with the British mystery writer Dick Francis, in which he described writing in ink in composition books (and that it had never occurred to him that a story, once written, could be revised!) so the method is definitely a time-honored one. Once I learned to type (in high school, on those really heavy manual typewriters) that became my preferred method, although when my children were small, I always carried a spiral-bound notebook on which to work on the Story of the Day in odd moments. Retyping a revision was a major chore, since I had to do it myself. I became expert in the application of white correction fluid. At least carbon copies were no longer necessary, but I had to take my finished manuscript to a copy shop because in those days no one owned a home copier.

I am of several minds about whether the ease of making changes as I go, being able to print out a manuscript at any stage, and so forth, have really changed how I write. I love the saying that the most important word processor is your brain. Perhaps I splat over the page, as it were, more spontaneously when I use a computer just because it’s so easy to tidy up my prose later.

That can be a good thing as I follow whatever wacky idea pops into my mind. Some of them are truly best expunged but others are quite juicy. In some ways I am more focused now than in 30 or 40 years ago; I know much more about how to put a story together, even if it isn’t one I’ve outlined.

Having multiple writing media available to me is a great thing. I often go back and forth when I’m stuck, especially between dictating and typing or typing and longhand. Dictation using voice recognition software is especially great for dialog or speeches (can you see me acting out the parts of the various characters?) Just as we don’t all write in the same way, I don’t write in the same way all the time. Sometimes words flow and then I want the medium that allows me to best keep up with them. But other times I’m stuck (or sulky, or distracted, or tired) and switching can help get things rolling again.

In the end, though, the only version that matters is the one in the hands of the reader.