Specifically, I have been in Montreal at the World Fantasy Convention. It was lovely. Not like any other WFC I have been to but there are plenty of reasons for that. For one thing, it’s in a Francophone area of the country, and my French is wobbly at best (fortunately, everyone I encountered spoke English, but I like to at least make the attempt). For another, the convention was a hybrid in-person/virtual format. WFC is usually a smallish convention–membership is generally capped at 1,000, but I don’t think on-site attendance for this con was more than 300. So it was… intimate. In a responsibly socially-distanced sort of way.

And soooooo safe. You cannot enter Canada without proof of vaccination and a negative COVID test. I was also selected for random testing at the Toronto airport (and it turned out the tech who entered my information writes SF, and was deeply envious about my destination and sent me a sample of his work). You cannot enter a restaurant without proof of vaccination (and they take this seriously). And at the convention the hotel and the convention staff were a great combination of on top of it and relaxed about COVID, which made it easier for the rest of us to be on top of it and relaxed.

So it was a small convention, and yet a convention with people from all over. I got to see people I haven’t seen in years–even before COVID. I had a couple of formally arranged meals, but (as always at conventions) many of the best conversations happened while I was standing in the hall (masked) or sitting somewhere trying to decide what to do for my reading. I was on a panel (Medieval Combat) which was great fun–we got going on Stupid Things People Write About Sword Fights and it was deeply amusing; and I got to do a reading which went over well. And I had such a good time talking with… well, I’m not going to drop names, but suffice to say, it was swell.

A note about the hotel. The first floor of the Hotel Bonaventure is actually on the 10th floor of the building, which is a celebrated example of the 60’s “brutalist architecture” style–all cement and glass. It’s very high-style, in a sort of updated 1960s way (my father’s office was on Madison Avenue, and the decor of the restaurants he went to would be right at home at the Bonaventure). Cushy square-edged chairs and couches, dark hardwood tables, and a garden outside the windows. You can barely tell that you’re up among the towers of a city.

But as a lover of cities, my favorite part was Sunday night, when my room-mate and I went out for a walk to the old part of the city. Daylight savings had set in, and it went from twilight to dusk (or vice versa) with the sky a beautiful back-lit teal and periwinkle. And there were holiday lights everywhere, which was lovely. A cellist played in the plaza in front of the Basilica, and restaurants and shops appeared to be doing a quite decent business–even if everyone was masked and staying carefully six feet apart. 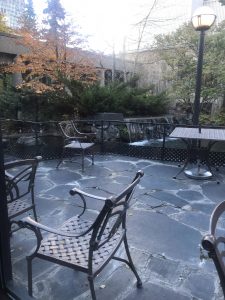 * I cannot express how reviving to one’s purpose it is to read something you’ve read and picked at and fiddled with, that now sounds like spinach, and have other people respond enthusiastically. A deep burst of “Onward!”

2 thoughts on “I Have Been Somewhere Else”