This weekend our lovely, ridiculous Elder Statesdog, Emily Apocalypta Robins, died. She’d been declining over the past year, but in the last week the progression had gone from a gentle slope to a sharp dive. She died in our arms, surrounded by love, and with assistance from a very gentle, thoughtful, kind vet who came to our home, listened to our Emily stories, explained the process, and shared a little of his own life-with-dogs experience. Afterward, while my husband and my daughter alternated between laughter and tears (you cannot discuss Emily without laughter coming in to it) I scurried around doing things, because that’s one of the ways I process and deal with strong emotions. The other way is… well, what I’m doing now. Writing.

Emily came to us from the SPCA when she was 3 months old–she had been rescued from a girl on a street corner in Bayview who was trying to sell her to get money for a prom dress (and apparently had not been patient with the puppy in the box, which was what drew attention to her). From that inauspicious beginning came the dog who was perfect for our family. She lived with us for 15 years, saw my kids grow up and go out into the world, and on the way, Emily generated many many stories.

There were the “my dog is a crazy athlete” stories: For most of her life Emily was a ball-dog, and loved nothing so much as to go to the park and catch fly balls.  She could get amazing height, land with aplomb, trot back with the ball, and drop it in my lap: “Again. Please.” We were known at the dog park as the crazy ball-chasing dog and her equally crazy owner who read while she tossed the ball over and over. And over. Even after Emily tore out her ACL (yes! My dog had a sports injury) that required surgery and put paid to her 8-foot leaps, she still loved to chase balls. Outside of the dog-park she enjoyed the company of other dogs, but in the dog-park it was all about the balls.

And there were the “my dog misbehaved” stories–I can literally say My Dog Ate My Homework, after she consumed the 100 hand-piped frosting flowers I made for a cake decorating class and had set out to cure. Or the time she discovered an edible and–well, don’t let anyone tell you that getting a dog stoned is funny–I wound up sleeping with her that night, just so she’d have a comforting presence. Or when she tore open 24 individual Ziploc bags to get at the brownies I’d prepared for a bake sale, and left the plastic evidence strewn around the kitchen (“Who me? Must have been some other dog.”) And she could raise stubborn to an art form.

There are the “What’s that, Lassie? Timmy fell down the well again?” stories–like the time I sprained my ankle while walking her, and fainted, and came to with Emily standing over me and barking furiously–not at me, but to warn people away from her human. In September she tripped my husband at the bottom of the stairs, and he fell and got a mild concussion… which led to a scan which discovered something utterly not-related which could have been very very nasty indeed, if it had not been discovered and treated early. 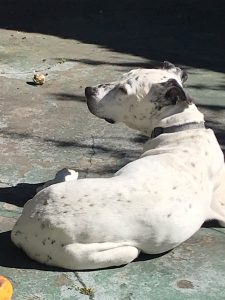 You see what I’m doing here? My husband and daughter cried a lot in the day or two before Emily’s death, and during, and have done so since Em died. I hope you won’t think the less of me when I tell you that at the same time I was thinking about how to write about it. It isn’t that I don’t feel Emily’s death, but I process by writing. Storytelling. Finding the right word to describe something (or making up the right word, if necessary).  I can describe the way the sunlight turned her already white coat even brighter (she had a high albedo). I can describe her extreme patience when we wanted to do some damned foolish human thing like put a pair of deely-boppers on her head for a photo. I can talk about her uncanny eye-snout coordination which–even with cataracts and weakened hindquarters–meant she could track and catch a volley of tossed treats (meatballs were a specialty) with breathtaking accuracy. And satisfaction.

People talk about a writer’s process, meaning everything from longhand vs. typed to outlining vs. freestyling, to surrounded by noise vs. in a quiet room. But for me writing is also processing, each emotional experience examined and understood by finding the right words. And this week I am very very glad I’m a writer.