In 1968, I took a seminar in political science from Professor Elliot Zashin, who held a PhD from the University of California at Berkeley and was considered something of a firebrand on the University of Texas campus.

He announced at the beginning of the term that this class was to be student-run. In practice, that meant that each of us put together a project or presentation for class.

There was the one where we all decamped for the day to someone’s house in Blanco and ended up divided into several cabals. (I no longer recall what we intended to accomplish.) My cabal decided that we needed to stay overnight and, since we had a mechanically inclined member, tried to enforce our position by removing the rotor cap from cars belonging to other members.

This led to someone storming out and then storming back in to demand that their car be returned to operating order, a demand we complied with, given the level of rage. It was still funny.

But I digress. The story from that class I want to tell is the one about our final exam.

A few days before finals, Elliot announced that we had been goofing off too much and that therefore we would have a final exam. We were, to put it mildly, outraged.

For one thing, we really hadn’t been goofing off. For another, this idea contradicted the entire spirit of the class. Some of us got together to rant and, eventually, to organize a protest. (Remember, this was 1968.)

But the only argument I remember from that day was from a guy whose name was, I think, Steve Shankman. He waxed quite eloquent, eventually excoriating Elliot for the failure of his “Harvard-Berkeley ideas.”

Elliot remained unmoved. He passed out the exam paper. It was one sheet of paper on which, in the middle of the page, had been mimeographed this quote:

Man is born free, and everywhere he is in chains.
— Jean-Jacques Rousseau

There were no instructions.

At that point, about half the class (seven or eight of us) got up and walked out. Our group included at least one person on scholarship who was worried about her grade.

Several other people stayed out of fear. One proclaimed that she stayed because the idea was so interesting and she wanted to write about it.

Those of us who left repaired to the student union to rant. (We were too young to drink or we would certainly have gone out to get drunk. Actually, most of us probably did go get drunk later — it was just too complicated to acquire liquor as underaged persons to do it immediately.)

I’m pretty sure we ranted beautifully.

About a week later, we got the word. The “exam” was a group project and the purpose was to see what we would do.

Elliot had hoped we would all come together and make one decision as a group — whether to walk out or take the test or write something revolutionary on the paper.

Alas, we did not achieve that level of organizing. But I submit that it was a very educational experience. 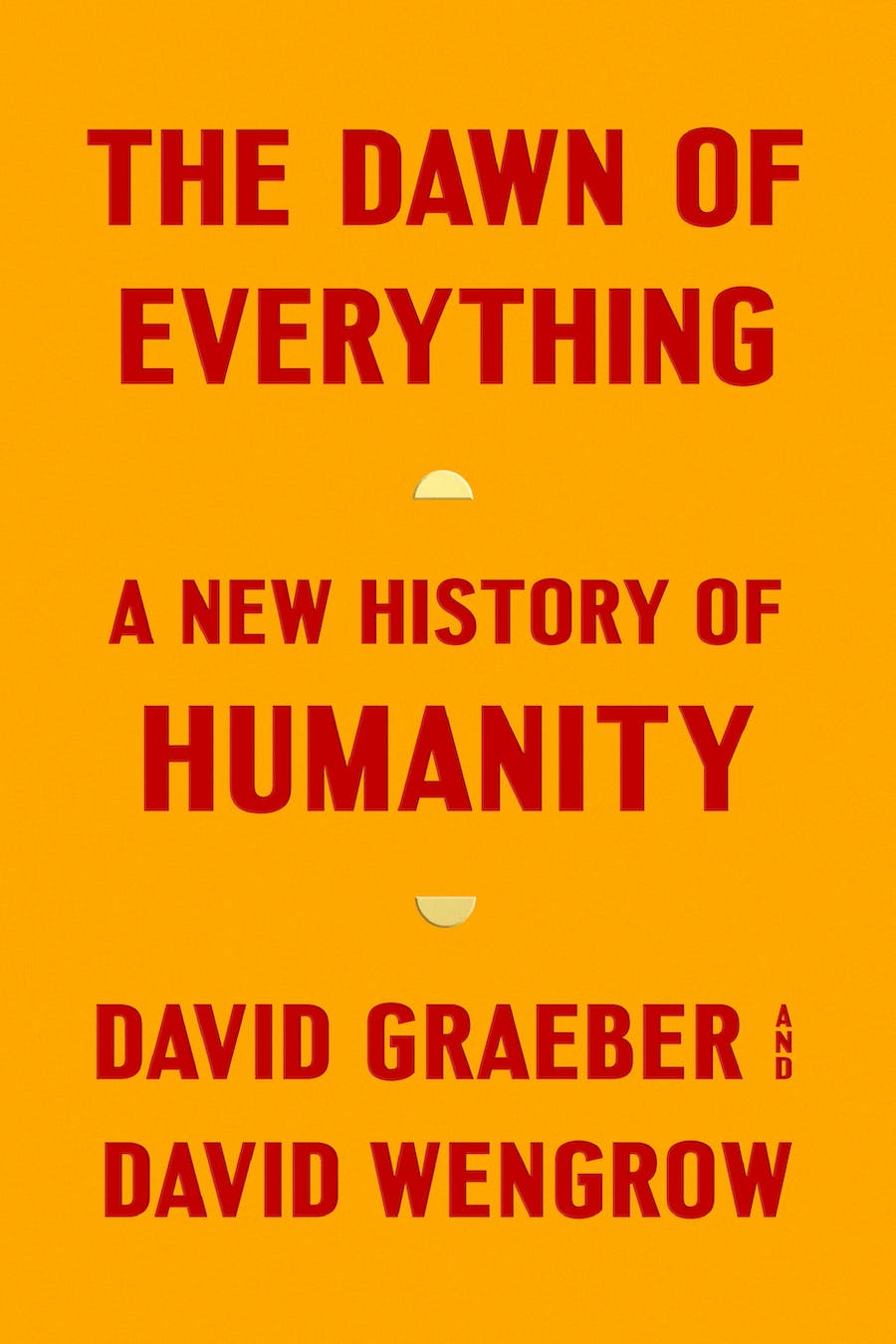 This came to mind because I am currently reading The Dawn of Everything by David Graeber and David Wengrow, and in the early chapters they talk quite a lot about Rousseau.

As I read, I realized that I finally understood that quote from Rousseau.

Oh, I’m sure I could have written on it happily back in 1968. I took it to mean that we were not stuck in the flawed systems that currently existed both economically and politically. That class and those times formed the basis for my politics, which have only become more radical in the years since.

But in reading Graeber and Wengrow’s dissection of Rousseau’s ideas I have come to a deeper understanding. Rousseau thought innocent primitive people didn’t realize what chains they were creating for themselves when agriculture and states came along. Graeber and Wengrow argue that his ideas were based on a misinterpretation of how earlier people — and particularly the Indigenous people of the Americas of the time — actually lived.

They are rejecting the fall from Eden scenario as amplified by Rousseau in his thought experiment without adopting the “nasty, brutish, and short” view held by Thomas Hobbes. One of their major points is that there was no one way that earlier societies lived.

Their criticism of several current writers on these points is gloriously snarky.

I’m only halfway through the book and suspect I will have to read it again to discuss it in any substantial manner, but it is a hell of a ride.

2 thoughts on “Another Take on Eden”