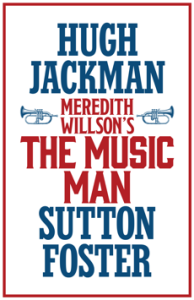 I’m going to New York in June, and just bought tickets to see Hugh Jackman and Sutton Foster in The Music Man. I am ridiculously excited about it.

The first show I saw on Broadway was Oliver! with the original cast: Georgia Brown, Clive Revill, Jed Allen, David Jones (pre-Monkees). I don’t remember who actually played Oliver.  I was… maybe nine? I already knew the score (we had cast albums by the dozens in my house, and I was sponge-like in my tendency to scoop up songs and commit them to memory). I dressed up to go to the theatre (which is what one did in those far-off days) and went with–my grandmother, I think. Or my grandmother and my parents, and my brother. Aside from the bragging rights and the pleasure of the show, seeing Oliver! marked my change from a pure consumer of theatre to a theatre kid. And while the performances were wonderful (Clive Revill’s Fagin was juicy in his evil glee) what really got me was the stagecraft.

By which I mean: I’d seen theatrical productions before–mostly kids’ shows–but this was full-blown Broadway, and this show did things I did not believe you could do live. To this day I don’t know how they got the effect of the water of the Thames washing up over Nancy’s body after Bill Sikes kills her. It was one of the first productions to have a rotating table in the center of the stage, which was used not only for scene changes, but very effectively as part of the business on stage (when Fagin sings “but who will change the scene for me” in “Reviewing the Situation” the static scene behind him suddenly starts moving and forces him to run after it, throwing “I think I’d better think it out again!” over his shoulder).

When I was fourteen and my Aunt Eva offered to take me to see any show I wanted, I wanted to see the Nicol Nicolson Hamlet which was the apple of the critics’ eyes. It wasn’t the stagecraft that got me this time–it was the direction, the line-readings, the weight given–or not given–to familiar lines (in Act III Hamlet gives Ophelia a scorching kiss… then pulls back and says with disgust, “Nymph, in thy orisons be all my sins remember’d” and the effect was the same as if he’d slapped her. Loudly). It was a revelation to me: this wasn’t Famous Shakespeare™: this was people being human and–in many cases–horrible to each other. It was stunning.

I majored in theatre in college, at a school that did not, at the time, have an actual theatre major. As one of my English department instructors rather disdainfully put it, “It’s an English major who doesn’t want to write papers.” (I liked writing papers. I also spent hours and hours and hours in the costume shop and the theatre, and discovered that I’m not a great, or even a good actor, but I’m hell on wheels as a stage manager). After college I dabbled in performing–mostly as a stage combatant doing fights and singing at the New York Renaissance Festival, and later Shakespeare with mayhem for school groups. And every single production–from Ben Johnson to The Fantasticks to a Robin Hood play in Central Park–there is always a hint of that “I didn’t know you could do that” for me. Going to the theatre is magic. Working on a show, despairing and sweating and swearing and seeing it all, somehow, come right in the end*, is magic. Now, with the world  emerging from its masked and anxious state, I cannot tell you how eager I am for more of that magic.

*every theatre person I know loves the line in Shakespeare In Love where theatre owner Philip Henslowe assures an irate investor that it will all come out okay in the end. “How?” the investor asks. “I don’t know. It’s a mystery.”