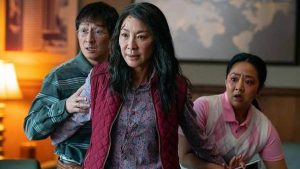 Inspired by Nancy Jane Moore’s piece last Friday, I downloaded The Baby on the Fire Escape.* I’m working my way through it–it is wonderfully written, dense and thoughtful, with much to digest. As Nancy says, it’s about mothers as creators, about the ways that women have found to do creative work, sometimes in the interstices of motherhood, sometimes by turning their backs on motherhood, sometimes working with support, sometimes going it alone.

When my older daughter was about two, my husband held the fort and I went to see the Kenneth Brannagh Frankenstein. Which was meticulously true to the source material, and which infuriated me, because I find the source material infuriating.  For all its pondering on the nature of creation, Frankenstein is about a parent who creates life, then freaks out, drops the “baby” and heads for the hills. Which he can do because, well, he’s a man. I came home and wrote a short story, “Willie,” about a doctor who creates life, like Frankenstein. He has been focussed on the creative act, not what to do with a 6 foot tall infant if the experiment works. But rather than decamp, my Professor raises the boy. Because I set the story in contemporary America I was able to bring in child care and competitive preschool entrance applications, as well as getting the kid into Scouts and Little League when he’s old enough. It’s a fairly quiet, gentle story, despite the outrage that inspired it.

Reading The Baby on the Fire Escape made me think of “Willie.” In writing the story I bought totally into the narrative that being a parent means reducing involvement with the world. As the Professor gets more involved in raising his “son” he does less and less of his own work, until it gets to the point where he overhears someone essentially say “didn’t he used to be someone?” But by that time he’s invested in the new life he’s made for himself as a parent.

I am alive to the contradictions in all this: here I was, a woman with a toddler, able to have some sort of creative life (because I’m married to a wonderful supportive guy who took the helm when I was writing), creating a parent whose world shrinks when he takes responsibility for the life he’s created. I found myself wondering if I could have written the story so that the Professor maintained his scientific life even while parenting, as so many women have found a way to maintain a creative life despite the demands and interruptions of raising a child. But that wasn’t, in the end, what my story was about.

After I started writing this post I went to see Everything, Everywhere, All at Once, which is a wonderful film about… so many things. Parenting. Damage that descend through generations. Choices. Love. Chaos. Evelyn, the protagonist (played by the magnificent Michelle Yeoh) is a middle aged woman who runs a failing laundromat with her husband. They have emigrated from China, they have a troubled adult daughter, they’re being audited by the IRS… each new layer of trouble is greeted by Evelyn a mixture of outrage and stoicism–how can this be happening and no, I’ll deal with it, and that parental favorite, can talking about your problem wait until I’ve dealt with all the other forest fires? Evelyn’s life is at a confluence of disasters… and then she gets entangled in her lives in other universes. No, this is not Dr. Strange. This is a movie with universes where Evelyn is a singer, or a martial artist**, or a rock (on an Earth where life never evolved). And Evelyn is the only one who can save all the multiverses from an existential threat, and… It’s funny and heartbreaking and no one–even the IRS auditor–is exactly what you think.

So now I’m thinking about chaos and motherhood, the nests of interruption and work and love that doing creative work–or hell, any work at all–while parenting calls up. Many women I admire chose–were fortunately able to choose–not to have kids. I’m not sure that that has made their creative lives any easier than mine has been with children. And it’s the nature of chaos and individual character that I don’t suppose I’ll ever know.

__________
*piquant side note: That’s a title guaranteed to get my attention: when my daughter was about 6 weeks old, there was a Bad Night during which I seriously contemplated throwing her out the window. I like to think I would not have done it; in any case, I realized that opening the gate, holding the window open, and throwing my 9 pound dumpling with sufficient force to get her to clear the fire escape was simply beyond me at the time. So I kept walking in circles. She is now 32 years old, and I made the right call.

** It’s Michelle Yeoh. Of course there’s a reality in which she is a martial artist.