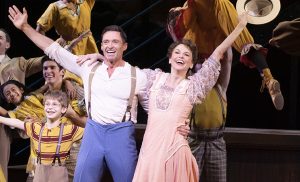 Certain shows (I’ll spare you the list) lodge deep under my skin–The Music Man, which I saw last week on Broadway, being one. I grew up with the cast album (Robert Preston and Barbara Cook) and the film (Robert Preston and Shirley Jones). I had never seen it staged, however, so when the opportunity arose to see a revival with Hugh Jackman and Sutton Foster, I leapt at it, credit card in hand. I want first to say that I liked it a lot. That being said…

It would be very easy for me to go one of two ways with this new production–uncritically adore it because it’s The Music Man, fer chrissakes, or worry away at it because it’s not the Music Man I grew up with. Short of exhuming Robert Preston and Barbara Cook, or flying Shirley Jones in (at 88, dancing the Shapoopi might not be on her to do list), you’re not going to give me the Music Man I grew up with. And anyway, times have changed and certain things are creaky–even when they might have been “accurate” for the time in which the story is set. I have, however, seen essays basically tearing this production down because Jackman isn’t Preston and–even worse, in one writer’s mind–Foster isn’t Cook.*

I have a couple of bones to pick, sure. The show’s tempo was fast–here and there they could have slowed the tempo down a titch, to useful effect. I loved the woman who played Mrs. Paroo, but wish they’d cast someone younger. Hugh Jackman, who was clearly enjoying himself, wasn’t quite the Harold Hill I wanted him to be (not Preston, but maybe a magnified version of himself?). But none of those quibbles got in the way of the things I liked–nay, loved.

You know the story, right? Fast-talking con-man comes to Iowa town and convinces the parents that a) the young men in the town are on the brink of damnation and b) the only way to save them is for him to establish a boys’ brass band. His intention, of course, is to sell instruments and uniforms, then hightail it without having taught the kids how to play their instruments. He runs afoul of the town librarian/piano teacher, who wants to expose him. By the time of the salesman’s inevitable discovery, love has reared its head and somehow, the boys have figured out how to play the Minuet in G. Happy ending!

In the film version (and I suspect in the original Broadway show) Marian the librarian is a frustrated romantic who looks down on the people in town who don’t share her love of culture. In this version? She may be a romantic, but she’s also angry. The subtext of a lot of the townspeople’s lyrics is that Marian–an unmarried woman who supports her family–is a slut: “she made brazen overtures to a man who didn’t have a friend until SHE got here.” Every man who’s ever expressed an interest in her believes she’s “easy.” Her mother, starry-eyed romantic, keeps encouraging Marian to take an interest in any man who takes an interest in her. Her little brother  is angry and depressed about the death of their father two years before–and Marian seems to be plenty angry too. So when the silver-tongued Harold Hill arrives and singles her out for his attention (in hopes to distract her from his utter ignorance of actual music) she hisses at him. She doesn’t just stick her nose in the air–you get the sense that she’d cold-cock him if he got much closer. So when she sings “Til There Was You”– “there were birds in the sky, but I never saw them winging…” it’s not just a love song, it’s a declaration that somehow he has helped her to let the anger go.

There’s also been a little bit of a flap about the reconfiguration of “Shapoopi,” a rather lightweight dance number which, in the original lyric lauds the charms of a woman who isn’t too easy, but not too standoffish either; not the most problematic lyrics out there, but still…. Rather than cut the number,  they’ve updated it: the man who doesn’t push too hard or assume too much? He’s your Shapoopi. I understand the change, and rather like it, but I’m not certain it was necessary.

There were bits of splendid stage craft (the Wells Fargo wagon comin’ down the street is wonderful), and the costumes were gorgeous without having the spun sugar perfection of the clothes in the film (Marian’s clothes look like she works in them). But one of the best bits to me was a moment of genuine theatrical improv: at the very end, for the curtain call, all the cast comes out in band uniforms, with Hill and Marian ready to lead them. Jackman raised his whistle to lips–and only a weak blat came out. Tried again; nothing. After a third try (while he and Foster stood there cracking up) he stopped, threw his arms up, and yelled “WHISTLE!!” And the finale went on. It was delightful.

In fact, part of the delight was how much fun everyone seemed to be having, on stage and off.

The earlier versions of Music Man are still available to me. I liked this version because it gave me some new ways to look at a beloved favorite. The librarian may be angry–deservedly so–but she doesn’t have to stay that way.

*For some musical theatre geeks the marquee name is Foster; for others, it’s Jackman. Potato/Potahto.