I was reading a feature piece in The New York Times by a man in his 40s who was out getting ice cream with his aunt — something they’d done regularly when he was much younger.

He described his aunt thusly: “Her brown hair had gone mostly gray, but she had every bit of the energy and snappy wit I remembered.”

It annoyed me. My reaction was, “Well, why wouldn’t she?” I mean, gray hair doesn’t mean someone’s not still the same person they always were.

It’s the same kind of attitude that causes reporters to write stories about “grandmothers” doing something that is supposedly unusual for someone their age, such as defending themselves from a mugger.

I know a lot of grandmothers with black belts. Just saying.

I also pick it up in well-meaning statements about “looking after our elders.” In many cases, those elders are doing a great job of looking after the community.

As I was writing this piece, I saw on social media that Suzy McKee Charnas had died. One person described her reaction to this as “gutted” and that summed up mine as well.

Suzy was one of my teachers at Clarion West. She was someone I saw regularly at WisCon over the years. She gave me the best Tarot reading I ever had.

And it goes without saying that she wrote some excellent books and stories, ones which will continue to resonate in the future.

The last time I saw Suzy in person was at the memorial for Vonda N. McIntyre in 2019. I was gutted then, too.

Suzy and I were staying at the same hotel and ended up having breakfast together the day after the memorial. I don’t remember what we talked about, but I know it was intellectually stimulating and gave me something to chew on besides my grief as I flew home.

Here’s the thing about both of these women in their later years: I would never have described them as still “spunky” or “feisty” or some of the other patronizing words we use for older women who don’t fit into the expected presentation.

They were, over the years that I knew them (in both cases, the last third of their lives, give or take), just Suzy and Vonda, sharp minds, brilliant writers. They didn’t become less than as they got older.

They aged, sure. Their bodies gave them limitations, as all bodies do with age. But they didn’t become different people. They didn’t lose the characteristics they’d always had.

I’m pretty sure it would have pissed them both off to be described as still having “energy and snappy wit,” as if that was a surprise.

Now I know there are some frail old people who do need care. And dementia is real: my father had Alzheimer’s and I had to figure out how to walk that line of taking care of someone who is no longer capable of making their own decisions while still treating them as a person. It’s hard and I’m sure I didn’t always do it right.

I get very angry when I see people fail to yield or give way to  someone (who may or may not be old) using a cane or a walker or other assistive device.

So I’m not saying it’s not important to take care of people who need extra help for whatever reason. I am saying it’s not accurate to treat all people over a certain arbitrary age as falling in that category or to assume that just because someone is frail they don’t have anything important to say.

For me, one of the hardest things about getting old is that you start losing lots of people, people you always wanted to have around, people who mattered, people who had something to say. I lost several good friends right around the time I turned 50, and the numbers keep going up with each year.

I know that’s inevitable, because despite some lovely fantasy stories on the subject, human beings are mortal. We aren’t even the longest-lived creatures on this planet. None of us are going to be here forever.

But while we are here, let’s appreciate each other no matter our age and appearance. And not in a patronizing way.

Here’s a photo from six years ago, at the Tiptree Symposium honoring Ursula K. Le Guin, taken by Nina Kiriki Hoffman, of Vonda, Suzy, me, and my partner Jim.

Even six years ago none of us were young. But look at Vonda and Suzy. Don’t you want to know what they were about to say? 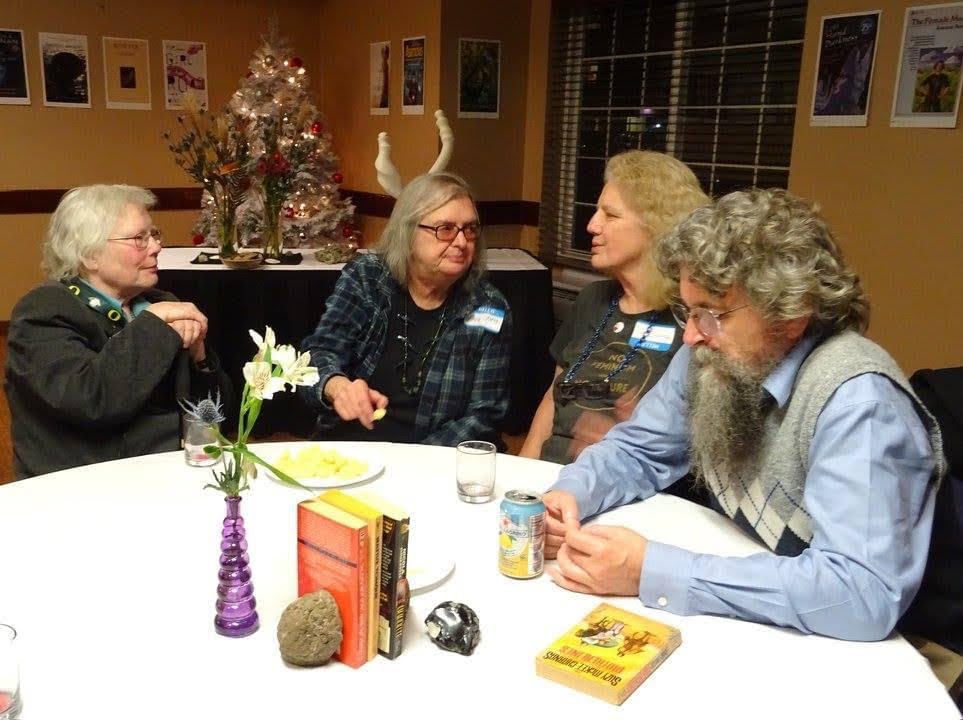 6 thoughts on “Thinking About Aging and Loss”