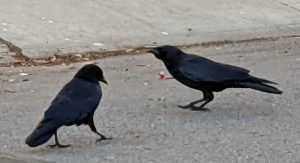 Shortly after dawn most mornings, a crow calls loudly, “Caw, caw, caw, caw.” It seems to be speaking to the whole neighborhood of crows, though I’m not sure how large an area this announcement covers. I refer to this as the “Call to Prayer,” because it reminds me of the calls used by mosques, but I don’t know its true purpose.

Shortly after the call, crows come by our window box, collect the cat kibble we put out the night before, and have a drink in the pan we’ve put out for that purpose. The actual time this happens varies depending on what time the sun comes up. It can be a bit later on days when the marine layer is strong, but the crows will be out and about even on overcast days.

Except when they’re sitting on eggs and raising fledglings, the crows don’t sleep in our neighborhood. Every evening, not long before sunset, they start flying to their roost. I am told by others that one big roosting place is along the Berkeley shoreline. I suspect there are a number; there are a lot of crows in the East Bay.

They do build nests in our neighborhood, but we have never been sure exactly where their nests are. They are very good at concealing them in the larger trees somewhere.

Crows are obviously quite social. They hang out in family groups, some of them clearly the young from earlier in the year or a year or two before. However, each small family group has territory within the neighborhood, and they seem to be careful not to invade each other’s areas.

They can tell people apart, which puts them one up on us, because we cannot tell crows apart by appearance. We know one group because of where we see them regularly and because they have almost no fear of us. When we toss kibble for them, they will fly right down. Others, who also live nearby, wait until we’ve moved on to collect the goodies. END_OF_DOCUMENT_TOKEN_TO_BE_REPLACED