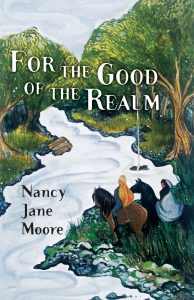 Here’s my review of For the Good of the Realm, by Treehouse Writer’s own Nancy Jane Moore (Aqueduct)

The elevator pitch for this charming historical fantasy is “The Three Musketeers With Women.” That does not do justice to the book by a long shot. The concept is familiar enough, from both the novels by Alexandre Dumas and the many film adaptations. In this swashbuckler tale, heroic, chivalrous swordsmen fight for justice and for their unbreakable friendship. The original, written in 1844, featured men in all the fun roles, with women being either weepy and weak or deviously evil. But why should the men have all the fun? I expect just about every female reader or viewer has railed at the injustice of depriving half the human race of such valorous deeds. Nancy Jane Moore, a thoughtful writer and skilled martial artist, has now set things right.

For the Good of the Realm is and isn’t like The Three Musketeers. There’s a realm like France, a royal couple divided by politics, each served by their own dedicated guard, and the head of the Church bent on cementing their own power. In this world, however, the Queen’s Guard is comprised of women, and the King’s Guard of men, and the queen’s advisors are largely women, as is the Hierophante. Add to this the existence of magic, condemned by the Church, arousing superstitious dread but freely used by the enemies of the Realm. There is no green recruit, D’Artagnan, but a pair of women friends from the Queen’s Guard – Anna D’Gart and Aramis, who fights duels as an amusement and cannot quite seem to give up her bawdy relations to become a priest. Each has a lover from the King’s Guard from whom they must keep secrets, but with whom they occasionally join forces.

The structure of this novel reflects the style to which it does homage. The point of view straddles the divide between third and omniscient, less intimate than is currently in vogue but marvelously evocative of Dumas and his contemporaries. Moore’s control of language and tone never falters as she draws the reader into not only a different world but a slightly different way of experiencing that world. Today we confuse “closeness” in point of view with emotional closeness to a character, but as Dumas and now Moore demonstrate, readers can feel very much in touch with a character through the careful depiction of actions and words. This is, after all, how we come to understand the people in our lives. “The adventures of…” implies an episodic arrangement, but here each chapter and each incident builds on what has come before and lays the foundation for what is to come in subtle, complex ways. The final confrontation between Anna d’Gart and the evil, scheming Hierophante is less a Death Star explosion than it is the inevitable showdown between two highly competent chess players.

In reflecting on the pleasure of immersing myself in For the Good of the Realm, it strikes me as a tapestry created by a master weaver. There is an overall picture but the intricate details and skill of the stitchery – the lives and relationships of the characters – are what lend it depth and resonance.

Order it from Amazon here or from your favorite bookstore. 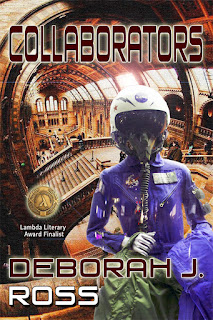 For my alien race in Collaborators, I also wanted sexuality to be important. I
decided that young adults would be androgynous in appearance and highly sexual. Sex
would be something they’d enjoy often and enthusiastically with their age-mates.
However, the intense intimacy created by sex exclusively with the same person would
lead to a cascade of emotional and physiological effects resulting in a permanent,
lifelong pairing. The pairing, a biological bond obvious to everyone around the couple, would lead to polarization with accompanying mood swings, aggression, inability to
focus. Each partner would appear more “female” or “male,” which would inevitably set
up occasions for misunderstanding with Terrans, who think and react in terms of those
divisions. The natives, on the other hand, would wonder how people who are
permanently polarized can get any work done, and react to Terran women as if they
were all pregnant, and therefore to be protected at all costs because their own birth rate
is low. Just as we’ve instituted the canonical talk about the birds and the bees, or sex ed
in schools, so the natives would have traditions of preparing their young people, trying
to ensure that pairing does not have disastrous political or inter-clan consequences. We
know how badly that works in humans, so it’s likely to be equally ineffective with native
teenagers, too. END_OF_DOCUMENT_TOKEN_TO_BE_REPLACED