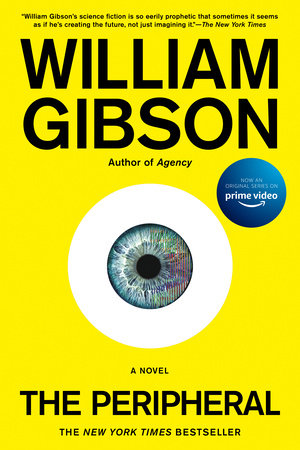 I recently read William Gibson’s The Peripheral. In it all kinds of creepy things are going on that ordinary people don’t know anything about.

It harks back in many ways to Neuromancer and its sequels in terms of the level of science fiction in it. Some of the books he wrote in-between felt so close to the near future that they almost seemed mainstream, but The Peripheral incorporates a not-too-distant very different future.

It is, of course, beautifully written. Gibson has always been an excellent writer. I wasn’t a big fan of a lot of the cyberpunks, but back in the 80s, when I was mostly catching up on the great feminist SF of the 70s, I also read him.

And like some other writers who’ve been at this a long time (I’ve commented before about this with respect to Kim Stanley Robinson and Karen Joy Fowler), he’s just gotten better with age. You get the feeling that everything he’s done in the book is deliberate.

He did what he wanted to do.

The thing is that, despite the fact that I’m not inclined to believe in conspiracies — which is to say, I know people conspire, but I don’t believe in big complicated ones that involve things just beyond our ken, as a rule — I’m starting to feel like we’re living in Gibson’s world. END_OF_DOCUMENT_TOKEN_TO_BE_REPLACED