Anyone who has followed my social media for more than a few weeks know that I don’t shy away from having an opinion, nor do I shirk from standing up and making some noise in support of what I think is right.   So when the BLM/anti-police brutality protests started in Seattle, I laced up my boots, wrote the number of my bail contact on my arm, and went down to Capital Hill.

That night was not the first time I’d seen the police attack unarmed protesters.  It was, however, the first time I’d ever been tear-gassed or shot at.  And I discovered – much to my own dismay – that my first instinct is not to run from danger, but to run into it.

(short story shorter: I got my companions out of danger, then went back in, because the cops were using flashbangs as well as tear gas, people needed ear protection, I had a 50-set pack of earplugs, and…   Somewhere, my mother is sighing, but also, I think, a little proud.)

ANYway.  A little while after that, my boss mentioned that she was attending a training session for basic techniques in militant nonviolent civil protest, sponsored by Valley & Mountain and Washington Poor People’s Campaign: A National Call for Moral Revival.  And I thought, “if you’re going to continue to be a chaotic good paladin idiot, you probably need that.”

I went to the Monday session, which was interrupted by an actual shooter drill (a man came into CHOP, armed, and started raising a fuss), and then again on Thursday night, when it was relocated to Jimi Hendrix Park.  Each session was a little different, and I was glad I went to both.

Our instructor was Reverend Sekou, a Pentecostal preacher who was at  Ferguson and Charlottesville, and I’m going to say flat out that a) he was an excellent teacher and b) he swears like… well, like I do.  He’s also funny AF, while never undercutting the seriousness and importance of what he was training us to do.

To start, they had us ground ourselves, to listen to our bodies and focus on what we were feeling and thinking.  It sounds New Age hokey, but when you’re in the middle of a protest, you’ve got a lot of adrenaline running, so it was a good reminder to center and ground, as my own Wren Valere would say.

Then there was discussion of what militant non-violent protest means, and what our role is in the larger scheme, and why we do it.  “A deep, abiding love” was one of the phrases we repeated back to the Reverend – we act not from hate or anger, but love, and hope that our actions can bring a better world into being.  He used Christian theology, but it was olam chesed yibaneh in different clothing: we will build this world with love.

Militant nonviolent protest does not to attack, does not cause harm, but refuses to give way.  If they tell us to go, we stay.  If they try to push us, we sit.  If they try to carry us off, we make them do all the work.   Our job is, as the Reverend put it, to make “moral drama.”  To refuse to make it easy on the cops, and, if possible, get more eyes on the issue. To make folk at home aware of what is being fought for.

The first rule is the preservation of life.  The second rule is, live to fight another day. We’re not there to be martyrs.

We also heard from protest medics (heroes, every damn one of then), and from the national lawyers guild, who drilled us on how to interact with cops (short version: don’t.).  I’m pretty sure I wasn’t the only one, when they had us repeating the four phrases (“am I free to go?” “I invoke the right to remain silent,” “I want to call my lawyer now,” and “I do not consent to a search”) to hear in my head, “I had the right to remain silent, but I lacked the ability.”  Thanks, Tater Salad.

It wasn’t all discussion, though – far from it.  There were also repeated drills on how to do “non-confrontational noncompliance,” what to do if the cops start swinging, what to do if there’s shooting (which cost me a skinned elbow and a torn pair of jeans), and what to do if you’re hit with tear gas, all in the hopes that muscle memory would take over when needed, rather than (utterly natural and normal) panic.

And if anyone doubted that any of this might be necessary, the sight of the bicycle brigade ringing us in protection was a sober reminder that yes, there are people who want to see us fail, and are comfortable using violence to ensure it.  We were training in non-violent actions, but just as there are medics and lawyers and livestreamers, there also needs to be people who are willing to defend. It’s a multi-prong act, getting the world to change.

But we act in the belief that it can be done.  We will be the fulcrum for change.

There was so much more, most of which I’ll be processing for a while.  And yeah, inevitably, this shit’s going to end up in a story.  Probably many stories.  Because that’s part of the processing, for writers.

If you want to see for yourself, some of the sessions are streaming here:  https://www.facebook.com/valleyandmountainorg/ 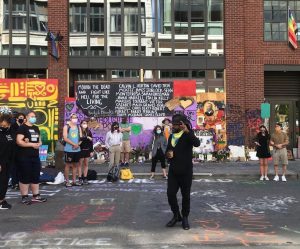 6 thoughts on “Love, Anger, And A Skinned Elbow.”