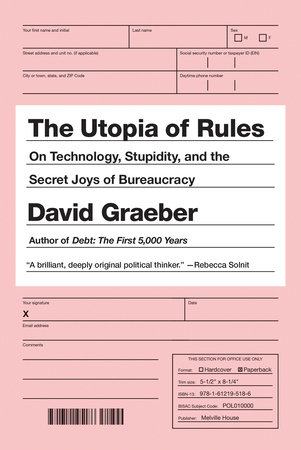 That’s a depressing thought, but this is not a depressing book. Far from it. It is entertaining, even light-hearted, while providing an analysis of bureaucracy that readers will find themselves applying to every aspect of their life, from the lack of flying cars to dealing with their health insurance.

Graeber, an anthropologist by training and profession, is known as an original thinker. His book Debt provides a very detailed and offbeat explanation of the history of money and finance. It’s a complex book, but I’m finally getting around to giving it a thorough read.

The Utopia of Rules was written in a less serious vein, but his ideas are just as compelling.

From flying cars and Star Trek he moves on to the idea that games are a kind of utopia of rules. Have you ever watched kids playing a pickup game? They spend a lot of time arguing about the rules. Graeber is distinguishing games from play, which, because it is open-ended, can be very scary indeed. In fact, he observes, “Playful gods are rarely ones any sane person would desire to encounter.”

And that leads him to the observation, “What ultimately lies behind the appeal of bureaucracy is fear of play.”

The book is intended as “an attempt to begin a conversation” on the problems we label bureaucracy. He concludes the first section by pointing out:

Our lives have come to be organized around the filling out of forms. Yet the language we have to talk about these things is not just woefully inadequate – it might as well have been designed to make the problem worse. We need to find a way to talk about what it is we actually object to in this process … but at the same time, to understand … which elements carry within them some potential for redemption in a truly free society …

After reading this book, I found myself looking at every interaction with deeper understanding. Back when I first wrote this, I had just oame back from the physical therapist, where I gave them my insurance cards to copy once again, even though they are not only for the same policies I had two weeks ago when I last came in, but the same exact cards. The calendar has changed, so they need them once again.

That same week, my sweetheart spent a lot of time on the phone trying to order the prescription he gets every month because it was a new year and despite the fact that the doctor wrote a prescription that only has to be renewed once a year in April and the additional fact that nothing about his insurance has changed, the drug company needs a new authorization from his insurance company.

I can’t say reading Graeber on the subject has stopped me from ranting about these things, but at least I understand the problem a little more thoroughly.

And – just in case you need something else to whet your appetite for this book – the appendix discusses Batman.