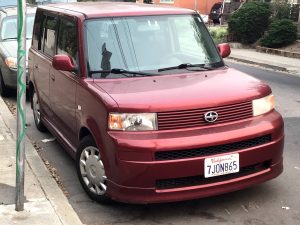 On March 13, I filled the car with gas because we were planning a trip to visit my sweetheart’s mother for her 90th birthday. But the next day we both woke up feeling a little under the weather, so we decided we shouldn’t go.

Four days later, the Bay Area set up a shelter-in-place to slow down the pandemic.

I haven’t put gas in the car since. According to the gauge, there’s about three-quarters of a tank available.

At a rough guess, I’ve driven the car about a hundred miles in the last six and a half months. To put that in perspective, I’ve walked about 850 miles in that same period.

Now it’s not unusual for me to walk more than I drive when I’m not traveling. I live in a very walkable neighborhood. And I’m even driving to run some errands right now; when you buy two weeks worth of groceries at once or are picking up a farm box instead of browsing the booths at the farmer’s market, a car is useful.

But it’s road trips that put the miles on my car, and I haven’t been on any. I’ve only left my neighborhood a few times. Those walking miles were built up going around the block and occasionally venturing to the next neighborhood over to pick up books from the library or the bookstore, both of which have very efficient curbside pickup.

I haven’t taken public transit since mid-March, either. Which is to say, I haven’t been much of anywhere except around the block for a long time.

It’s getting old, but I’m not planning to change the pattern much. I’m meeting up with friends for distanced walks (wearing masks), but the pandemic is far from under control.

Lately, though, the pandemic hasn’t been our only worry. We’ve got wildfires up and down California, and while they haven’t posed a risk to my neighborhood, the smoke from them has seriously affected our air quality.

A lot of people saw the pictures of the San Francisco Bay Area with the orange sky a few weeks back. Yep, that’s what it looked like from my bedroom window.

It’s not as bad this time, but as I write this I’m inside with the windows shut. It’s warm outside and we don’t have air conditioning because most of the time in the Bay Area you don’t need air conditioning. I also haven’t done the walking I wanted to do today, because I don’t want to breathe that smoke.

Now I know I’m lucky. I haven’t caught the virus. No one among my family and friends has died from the virus, though some have been quite sick.

I don’t have to go out to work or otherwise risk my life to make sure I have a place to live and food on the table.

I live with someone I love and we figured out early on that we were comfortable living together in a small space. So I’m neither isolated nor overwhelmed by lack of personal space.

I haven’t had to evacuate because of the fires. Friends of mine have had to do that – Deborah Ross has written about her experience – but I don’t know anyone who has lost their home.

We have a good air filter, so I can protect myself against the smoke so long as I stay inside.

I’m very lucky, but my heart still aches for all those people who aren’t. I don’t have to know people personally to feel all that suffering out there.

Now, to top it all off, we have this damn election. And while it’s pretty obvious that the criminal occupying the U.S. White House is losing, it’s also obvious that he’s got all kinds of vicious plans to cheat.

I don’t think anybody is completely convinced his cheats won’t work. I read blogs and tweets from smart people who know more about the situation than I do, and try not to be either too frightened or too complacent.

I didn’t watch the so-called debate this week. (I did debate in high school and I know what a debate should look like. From what I can glean, this one didn’t come close.) But a quick look at the news makes it clear that the whole situation is just getting uglier.

Despair is not usually my problem. Anger, yes, but not despair. My response to crisis is usually to figure out something I can do.

But the other night it occurred to me that I’ve put a lot of trust in this election and I felt a surge of panic. What if the unthinkable happens again?

I’m working on finding my center again, on figuring out things I can do. But it’s a harsh time even if you’re someone whose worst experiences this year have been that you haven’t been anywhere and you’re stuck inside because the air quality sucks.

Breathe (if you can). Find something you can do. Try not to panic.

With a little luck and effort, we get a respite from the ugly politics this year. If we get enough people who care about operating an effective government in office, we have a shot at bringing the pandemic under enough control and revitalizing our communities.

But the fires – and the hurricanes and the heat waves and the sea level rise – aren’t going away. Climate change is still the 800-pound gorilla of our time.

Even with real leadership, things are going to stay rocky.

Vote. Push for change. And fasten your seatbelts.