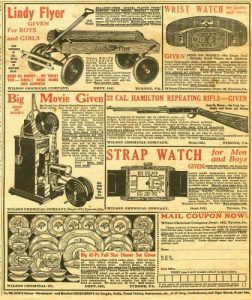 In looking for something else, I came upon an envelope I had taken from my father’s desk when I was clearing out his house. It contains the record of my father’s brief fight with the Wilson Chemical Company on my behalf.

Let me explain: when I was about eight, my brother and I came into a trove of comic books–more than a thousand, previously owned my the son of my mother’s best friend. And in the back of these comic books were ads of all sorts: X-ray specs! make money selling seeds! 150 Civil War soldiers for 99 cents! These ads were crammed full of pictures, with–very often–the words FREE! and GIVEN! in large type.

When I was nine, I filled in the coupon and sent for what I believed was a FREE! signet ring. What I got was a pressed-tin ring with a painted-on initial, and a dozen cans of petroleum jelly. Being not much given to reading fine print, I put ring and tins of salve aside and–aside from being vaguely disappointed at the quality of my free ring–thought of them no more. Until I got a threatening letter from the Wilson Chemical Co. demanding the $7.80 I was supposed to have earned by selling those tins of salve to friends, neighbors, and strangers.

Up to this point my parents had remained ignorant of these transactions. But that letter scared the daylights out of me, and I took it–and the tins of salve and the sad little ring–to my father. I don’t remember if he scolded me–I rather think not. But he sure as hell lit in to the Mr. George C. Wilson III, president of the Wilson Chemical Company.

I am returning to you under separate cover the package of White Cloverine Salve you so cleverly tricked my nine-year-old daughter into receiving.

I would have thought that this kind of shabby, old-fashioned medicine-man kind of obscure cure peddling would have been outlawed long ago or, at best, just left to die of its own deception.

This seems to me to be more than a matter of the old vendor philosophy of “let the buyer beware.” You are asking children to take advantage of their own and their parents’ good standing in their neighborhood and coerce their neighbors into paying 65 cents for just a few cents worth of petroleum jelly. It seems to me to be nothing more than a business based on a folksy, neighborly blackmail.

He goes on. My father, when riled, could be magnificent. I am particularly impressed by his later speculation that the cans I had received might have been previously sent (and returned by angry parents) to other kids who opened them to see what was inside, and that a salve meant to be applied to abrasions and burns would be a great medium for spreading infections. That would never have occurred to me, even as an adult. Maybe Dad just had a suspicious mind.

Mr. George C. Wilson III responded, of course, with bluster and defensive assurances. Dad got the cost of shipping this stuff back to the manufacturer refunded, and we never spoke of this again.

But years later, when my older daughter asked for a stamp so that she could send away for a free gift with a coupon from a magazine, I read the offer, spotted the scam and explained it to her, and told her the story of how Grandpa Rob stood up to the Big Petroleum Scam. And decades later, Dad’s invective on my behalf still makes me feel curiously protected.