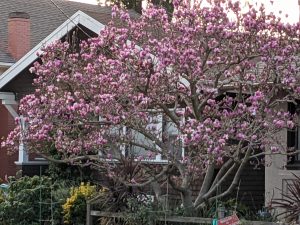 I walk. A lot. For the past six years, I’ve been aiming for a minimum of 10,000 steps a day, which is just under five miles.

Over the past year, dating from March 1, 2020 (a couple of weeks before the California Bay Area shut down for the pandemic), I’ve walked about 1,600 miles.

By comparison, I’ve driven my car about 500 miles during the same period.

1,600 miles is actually somewhat less than I usually do in a year. I had to cut back for a couple of months this winter because I was having trouble with my left leg. (I suspect sciatica, though I haven’t seen a doctor because it wasn’t hurting bad enough to brave medical treatment during a pandemic. And now it seems to be going away.)

Still, I walked more than triple the car miles, despite the fact that I was using the car to run errands because I was buying more at the store than I could carry home on foot and picking up farm boxes instead of leisurely pursuing the stalls at the farmers market.

It has, as they say, been a very strange year.

But the walking has been good. I now know my neighborhood streets very well indeed.

I have a core regular route, which is down my street to Webster, turn north on Webster and go a short block to Rich, then west on Rich until it curves and runs into 42nd, east on 42nd back to Webster, Webster back to 41st and back west to home. That’s a minimum of 1500 steps, on account of the fact that 41st and 42nd are very long blocks.

My sweetheart, who generally prefers bicycling to walking, often joins me on this route.

One great thing about this regular route is that one of the neighbors on Rich has a Little Free Library. At the beginning of the pandemic, she started putting jokes on the front of her library box. (My personal favorite: What do you call a parrot with an umbrella? Polyunsaturated.) I told her the other day that she didn’t ever get to quit.

Another fun thing about this walk is that we almost always see our neighborhood crows on Rich when it runs into 42nd, right in front of the Baptist Church. We throw treats for them there.

The same crows come around to our front window or to the back of our apartment where our office is to yell at us if they haven’t had enough treats.

We also see friends, some of whom we knew before the pandemic and others with whom we’ve become friendly because they’re out on their porches or playing with their kids when we walk by.

During the first months of the pandemic the people on Rich (which is a one-block, one-way street) held a dance party every Friday night. I wish they still did it, but I guess it got to be more than they could handle as things dragged on.

I do go farther, though, walking on the streets that parallel Webster. It seems like every time I go down a street I see something I hadn’t noticed before. Yesterday when I was walking I realized that two houses at the corner of Opal and 41st were mirror images of each other.

And I love to walk on Manila because the co-op at the corner of Manila and 41st has planted all kinds of trees and bushes along the sidewalk and it feels like a tiny bit of forest bathing when you walk through there.

Some days I go over to 38th, where there’s one house set way back from the street that I always stop and peer at. Huge front yards aren’t common in this urban area, and this one is protected by both trees and a fence.

Then there’s the woman on Webster who has stuffed her garage full of all kinds of strange things, from CDs to furniture to dishes to vintage clothes. I notice she’s opened it up again. It’s not exactly a store, more of a permanent garage sale, open whenever she feels like it.

Here in the East Bay, where temperatures are usually mild and sunshine is common, some kind of flowers bloom all year. It’s spring here now and just about everything is blooming, even the few plants that go dormant in winter.

The crows and other birds are out looking for mates and starting to build nests.

I enjoy my walks. I let my mind wander and end up with all kinds of ideas, all while getting exercise and exploring my neighborhood.

But by this time next year, I hope to hell I’ve had a chance to walk somewhere else.