I live with a geriatric half-Dalmatian former-athlete dog. She is sweet and stubborn and ridiculous… and approaching the end of her sell-by date. I had not thought to see my own mortality mirrored in my dog, but there it is. She’s not my first dog, but for a variety of reasons I didn’t get to see my earlier dogs age.

When I was seven and away at my school’s spring camp for a week, my parents had some friends over for dinner. As a hostess gift of sorts they brought… a beagle puppy. They had stopped at a gas station the week before, and found a litter of orphaned pups in the ladies’ room. They spent the next week distributing these tiny animals who were really too young to have left their mother to all their friends. This included my parents. I suspect my mother greeted this new addition to the household with mixed feelings. She wasn’t anti-dog, but she had two small children and here was another lifeform to be responsible for. By the time I suspect she was thinking that a beagle puppy was one lifeform too many, I got home from camp and was filled with bliss at the new addition to the family. Bagel (because he was a beagle, which should tell you everything you need to know about my family) was sweet, energetic, and… I think the Freudians would term it oral. Having been weaned by fate way earlier than he should have been, he couldn’t keep his newly arriving teeth off anything: his wicker dog bed; the baseboards; shoes, pencils, chair legs. Housetraining Bagel was a cinch; not-gnawing training did not happen.

After six weeks my mother gave up and announced that she could have two children or one child and one puppy. I lobbied fiercely to trade in my brother, but didn’t get very far. Bagel was given to a friend of my brother’s as a birthday present… and in turn was passed along to a friend of that family who had experience training dogs. Ave vale atque, Bagel.

I didn’t get a dog of my own until I was 13. We were–unbeknownst to me–moving full time to our Barn in Massachusetts, and I suspect my mother’s agreement to the whole dog-thing had a lot to do with that–softening the blow and finding ourselves in a place where “take the dog for a walk” was replaced by opening the kitchen door. Fio–Fiorello LaGuardia Robins–was chosen from a litter of puppies in a cardboard box. Despite that less-than-exalted beginning, he was my best friend all through high school. Whatever else was going on in my life–adolescent angst, family trouble, what have you–Fio was there. He was also my first taste of real responsibility–from taking him to obedience class, to waking up at 3am to let him out (and then being unable to sleep until he scratched to be let back in again), Fio was all mine. He had adventures–porcupines, skunks, and (his favorite) riding shotgun when I drove the Triumph with the top down–but mostly we hung out

Until I went to college, that is. Fio stayed behind (the Residential Office at Connecticut College having no sense of humor about pets in dorms) with my parents. He had always been a free-range dog, let out to roam the mountain behind our house, returning always for food and affection. But in the Fall of my sophomore year he didn’t come home. I sat in one of the phone booths in the hall of my dorm, weeping while my parents told me. In the years since, I have made up a fantasy in which Fio, tired of hanging out with my uninvolved parents, found himself a long-haul trucker and lived out his life riding shotgun with someone else. Don’t tell me it didn’t happen that way: it’s my story, and I’m sticking with it. 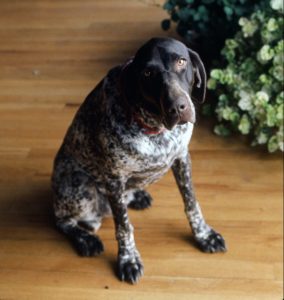 After I left home my father got a dog. Nellie adored my father, and the feeling was mutual. She was a sweet, high-strung German Shorthaired Pointer who vied with my mother for primacy in my father’s life (Nellie won, hands down). Nellie was something of a diva, and later in her life she developed epilepsy, an allergy to tall grass, and pancreatitis. Like Fio, she liked nothing better in life than to ride shotgun–but with my father. If someone else was a passenger they got to ride in the back: the front was absolutely Nellie’s. It says a lot about my father’s reputation in our small town that when there was an article about him in the local paper for whatever reason, the file photo was of Dad in the cab of his pickup truck, with Nellie sitting beside him. More than once, “Seymour Robins with frequent companion Nellie” was the caption.

I liked Nellie, and I like to think she enjoyed me, but she was really a one-man dog. I might get to take Nell to the vet if my father was out of town and I happened to be visiting, but I was clearly a distant second best. She and my mother were on polite but not affectionate, terms. Which was okay: you don’t come between a man and his dog. I wasn’t there for Nellie’s demise, but I do know that my father was, in his restrained way, very broken up about it.

Which brings me back to Emily. She’s 15 years old, which is ancient for a mid-size dog. Her hind legs are failing her (the consequence a misspent youth catching fly balls and blowing out her knees), she’s got cataracts and is going deaf, and is frequently a grouchy little old lady. But when she’s not? She’s a puppy. She wants every stranger on the street to interact with, and praise, The Dog. Preferably to interact with treats. She wants to play. We know she’s not going to last forever, which leads to a fairly close inspection of how she’s doing. But so far how she’s doing is… okay, in a creaky way. She still seems to love being around. God knows we love having her. So until Emily’s attitude changes, we have a dog.

2 thoughts on “My Life in Dogs”