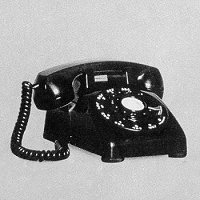 I hate the telephone.

I used to think this was because my parents hated the telephone. When we moved from Houston to the country outside of the then-tiny town of Friendswood, my parents refused to get a phone.

They explained this by saying that it was because Daddy didn’t want work (The Houston Post) calling him in the middle of the night to go cover some breaking news. I mean, they were fine with phones at work, where they needed them (as reporters and editors).

This lack of a phone was highly inconvenient. I remember running like hell down the road to the nearest neighbor to get someone to call the fire department when the pasture caught fire as we were burning trash. (Note that there were oil and gas pipelines across our property.)

It was also inconvenient if I forgot something for school and needed to call my mother.

They finally got a phone three years later, making it a birthday present for me. They also put it in my name. This made it possible for my father to continue to avoid unwanted calls. There are a lot of Moores in the greater Houston phone book.

It also meant that I started getting obscene calls at an early age. Not to mention calls for other Nancy Moores (something I have gotten all my life).

It was also a party line, which is something that people who always have their private phone in their pocket probably can’t comprehend. I think there might have been six households on that line, each with their own ring.

This wasn’t much of a problem, since we rarely spent a lot of time on the phone. Long distance cost a bundle back then and it was long distance from my house to the town where I went to school. Even talking to your grandmother on your birthday you got off the line quick.

It was only in the last years of her life that my grandmother was willing to chat on the phone for half an hour. I am glad I got those calls in.

But I didn’t set out to write about the history of the telephone. I was talking about why I hate it. It’s not just the culture I grew up in; it’s something more basic.

The telephone interrupts whatever you’re doing. It makes a loud noise and summons you.

Now this is valuable in an emergency. But most calls aren’t emergencies. In fact, all too many of them are junk calls.

The phone rings. It interrupts whatever you might be doing. If it’s a scam, it makes you angry. If it’s a solicitation for money (even for something or someone you support), it still interrupted you with something that didn’t have to be dealt with at that time. If it’s a reminder about an appointment, the interruption was also unnecessary — it could be done in another manner.

Sometimes I respond badly to these calls, yelling at someone who is just doing their job. Sometimes I agree to do something I’d rather not do just because they caught me by surprise and I didn’t have time to think about it.

And even if it’s a friend you like, it might not be the best time for talking. I like to make a date for long phone calls with friends and family.

All this is why I vastly prefer email for everything except actual emergencies.

I know email is considered old school these days, but hear me out.

First off, email can include all the necessary information about an appointment. If it’s an invitation or fundraiser, you can decide what you want to do and then respond.

It can be used to convey information about family and set up times to talk or get together.

And, most importantly, while it gets there quite quickly (life these days is too fast-paced to do business by letter), the recipient gets to decide when to look at it and answer it.

I will point out that I check my email often. I do like to be distracted, and I often open my email in the hope that there will be something interesting, maybe a link to something good to read or some news that cheers me up. That’s why I have email apps on my phone, so I can check.

But distraction is distinct from interruption. I decide when I want to be distracted. Interruption comes from outside, from someone who doesn’t know (and probably doesn’t care) that I don’t want to talk to someone right now because I’m doing something important.

(And yeah, that important thing might be playing Sudoku, but I get to make that call.)

With my cell, I can at least see who’s calling, though the call itself has already interrupted. Since my area code is not the one for the place I live now, I can pretty much screen out junk calls because they pretend to come from that area code but aren’t from anyone I know there.

I do like texting, but only in limited situations. I want to text when I’m meeting up with someone. I want my sweetheart to text me when he’s out flying or biking on his own, so that I don’t worry.

I do not want texts from politicians or organizations. While they are less disruptive than phone calls, they still are annoying. I only want a text when I’m more or less expecting one, not for initiating a conversation.

If you want my attention, email me.

I’ve just written 906 words without interruption. Now I’m going to check my email to see if someone’s looking for me. Good thing no one called. I would definitely have snarled.