On Being a Bipolar Writer

It’s pretty hard to write this right now. Each sentence is taking a conscious effort. Why? Well, I’m depressed. Unsurprisingly, given the current circumstances. Cancelling all my book launch events and conference panels didn’t help.

There’s not always a reason. Occasionally this just happens. But I can say this depression is “just a phase” without any hint of condescension, because for me, it’s true. I’m bipolar.

Sometimes I just want to lay on the couch and escape. Hours of video games are good for this, though not exactly healthy. I suffer from the emptiness and lethargy that is familiar to millions of sufferers of depression.

What’s less familiar is the other side of the coin—my manic episodes. I have unlimited energy and focus, and can dive into projects for hours on end, and the words just flow. Everything I write is the best thing anyone has ever written. (Impaired judgment is another symptom.)

Manic energy can be a superpower, if harnessed correctly. I can hit any deadline, tackle any obstacle, and breeze through it with the confidence of a narcissistic tiger owner. But as I said, it’s a double-edged sword. The crushing writer’s despair is even worse, and can wipe out all the progress I’ve made.

Writing helps. Getting things out on the page helps. During a depressive episode, it takes a monumental effort to sit down and get moving. But even as I type this, it has become easier. I do feel better. I’m not agonizing over every punctuation mark, and hey, I’ve produced about 250 words so far! Halfway there.

Routines help, too. And outlines. The less you have to think, the lower the energy it takes to get started. I don’t have to think, just check the outline, do what it says, and follow the routine. They also keep me moving at those times when I’m balanced, and don’t have that supply of manic energy to rely on.

So when my precious (fictional) girl Gwendolyn Gray started showing the same symptoms, I was hardly surprised. In 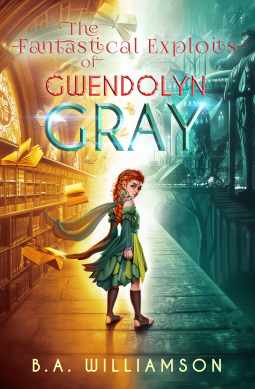 fact, it fit my story very well, and I had a compelling and unique character arc. I work with middle schoolers, and they suffer from depression and anxiety at alarming rates. Anyone shocked? Think back to middle school. It’s a terrifying, stressful, horrific experience for many of us. Now we have the awareness and language to properly describe the toll it takes on our kids. But conversations about mental health are all-too-often relegated to the land of Young Adult, while our adolescents are talked down to or treated as if their problems couldn’t possibly be all that bad.

I felt it was really important to show a story where a character grows up, and kids could see a reflection of their own struggles. As Gwendolyn struggles with larger-than-life monsters, readers can see a reflection of their own struggles that can feel so much bigger than themselves. And as her external struggles are a metaphorical mirror for their own, her internal struggles create a much more literal parallel. Her internal reactions give them something to relate to, and see themselves taken seriously.

It’s not terribly easy writing about mental illness in a fantasy context. They don’t have the DSM 5 in Fairlyand, there’s not a lot of anti-depressants on pirate airships, and dystopian societies aren’t big on therapy. I had to find a way to clue readers in, without using labels. I didn’t want to be metaphorical—Gwendolyn suffers from a very literal bipolar disorder. But using clinical terms was out. Her depression came across very clearly, and my readers picked up on it right away. But in terms of her manic episodes, it left many of my beta readers asking, “Why is she so annoying all of a sudden? She’s not acting like herself. Why is she being so stupid and immature?”

All of which were intentional, because that’s what mania is like. So, I relied on visual cues—the fairies in my story all glow, and they’re about as manic as it gets. The more manic Gwendolyn becomes, the more she glows. And of course, just as in life, there are toxic people around her who find her much more fun when she’s out of control, and keep pushing her in that direction.

Magic should always have a downside, and her downside is that the more she relies on her magic, the more she loses control of herself. Again, this is absolutely true. The more I indulge my manic side, the worse it gets.

The lack of labels had the unexpected benefit of making her mental illness nonspecific,

allowing readers to see their own experiences reflected in it, even if their struggle isn’t a bipolar disorder, but depression, anxiety, or just the hardships of growing up.

Since I can’t very well resolve her character arc with a healthy dose of therapy and well managed medications, it gave me a chance to lay out real coping strategies, or at least the ones that work for me. Gwendolyn meditates. She exercises. She shares her struggles with her friends, and rids herself of the toxic people in her life. She consciously uses positive self-talk.

At the end, she learns that these struggles are a part of who she is. They don’t make her any better or any worse than anyone else. Her manic-depressive nature is just one more piece of different in the sea of the differences that make her the unique and wonderful person she is. And in that acceptance, she finds the peace of mind she needs to manage whatever comes next. Of course, being the kind of author I am, “whatever comes next” is probably going to be pretty horrible. I’m so sorry.

It isn’t easy. I don’t always want to leap out of bed and sit down at the keyboard. But is that really all that different than anyone else? Where is the line between depression and everyday fatigue and procrastination? But that’s not really a question I need to answer. There aren’t three different versions of me, clearly delineated between depressed, balanced, and manic. I don’t have to find a label to apply to myself each day. I’m just me, with my own moods and behaviors and quirks and talents. They may swing around more than most, but I can accept that, manage it, and in the end, use it to create great things.

But I guarantee you, every word is the best word that anyone has ever written. At least, that’s what I think half of the time.