Every time I am invited to a Christmas party, I have to decide whether I should go. If it’s a friend asking me to share their celebration of their Christmas, I accept with joy. If it’s a public or professional event that’s called a “Christmas Party”, one of the implications is that if I don’t accept Christmas as a part of my life, then I am not really acceptable as I am, with my own views and culture, in that environment.

Not that the organisers articulate it in this way. Recently, when I asked a professional group what they meant by “Christmas” they explained that it was secular. While this was perfectly acceptable for them, they demonstrated that a secularised version of a religious celebration was seen as acceptable for all shapes of religion and belief because they explained to me (and they know I’m Jewish) that it was secular for me, too. This tells those of us without Christian backgrounds that there is a certain way we should live our lives.

How the lead-up to Christmas is depicted in Australia is related to this. There is an “Advent” book box being advertised right now. It takes the word “Advent” (which refers to a very particular coming birthday) and one can open one wrapped book a day from 1 December until Christmas Day. I’m told it is, also, not religious. But there are never any book boxes for the festivals of other religions. Instead, we are all asked to accept the redefined religious words for Christianity.

Whether these explanations work for me, for you, for someone else, depends on our background.

For me, it creates a disjuncture between the home and the outside world. The values in my home are Jewish, and my parents taught me that I should not celebrate others’ festivals for myself. Why? It’s an acceptance that their religion takes precedence over my own. In their homes, that’s a sign of respect. In my home, why don’t my own traditions and belief take precedence? In public events and shared places, explaining that a thing is secular not only sets the Christian festival as something that is shared by everyone (when it, frankly, is not) but it also rubs it in that my views do not matter.

The fact that someone explaining Christmas to me as secular shows how they set their own atheism in a cultural context. It also demonstrates that they’re not listening to people who have different contexts.

Cultural respect and religious respect involve understanding how the person we’re talking to sees the subject we’re talking about. This entails accepting multiple interpretations of an event. Do you leave someone out of a group because they can’t eat peanuts? Or do you make sure that there is shared food everyone can eat?

This is my annual rant on the subject. Shorter than usual because it’s 1 am here and bed beckons.

I shall skip the Christmas party, because I’m not convinced the person organising knows much about Christianity. Also, I won’t buy the books. Instead, on the day of the party, I shall tell anyone who wants to hear my two favourite miracles for St Nicolas (the children and the bones, for anyone who has had to suffer my tale-telling) for the party is on his holy day and he’s the bloke who became Santa Claus. I need to practise what I preach, in other words. If you who want to hear about the pickled children and how they are Santa’s backstory, please ask.

On the book-front, I’m doing my own thing. I will send book parcels on behalf of anyone who wants to give presents to friends and family in Australia. This is actually not my response to the religion issue. It’s my response to books being a bit difficult to buy and to international mail being a lost cause. If you know anyone wants to give presents to anyone in Australia over the next few weeks, check here: https://gillianpolack.com/sale-until-18-december-or-until-the-books-run-out/

I have nothing against presents (I adore presents), after all. My objection is to people who insist that my own background doesn’t matter a jot. 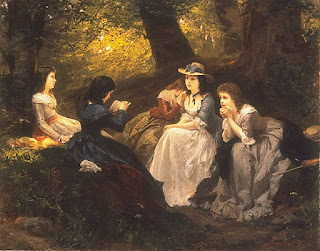 Stories can heal and transform us. They can also become beacons of hope.

Quite a few years ago, when I was going through a difficult personal time, I came across a book about the inherent healing power of telling our stories. No matter how scattered or flawed our lives may appear, as we tell our stories, we gain something. Patterns emerge from seeming chaos, and our lives begin to make sense. It may be dreadful, agonizing sense, but even tragedies have order and consequence. I found that over time, the way I told my story changed, reflecting my recovery process and new insight.

The mirror side of story-telling is story-listening. While a confidential diary or journal can be highly useful, having someone hear our words can be transformative, especially if all that person does is listening. Not judging, not analyzing, not wondering how to respond, just taking in our words, a silent partner on our journey. Often we feel less alone in retrospect, no matter how isolated and desperate we might have been at the time. Additionally, a compassionate listener invites us to be kinder with ourselves.

Perhaps this is how Twelve Step programs work, apart from any Higher Power mysticism or Steps: that by simply hearing our own voices relate our histories, and having the experience of being heard, we open the door to viewing ourselves through the lens of new possibilities.

Personal storytelling calls for discretion, of course. Although it may be true that “we are only as sick as our secrets,” casually (or not-so-casually) violating a confidence from someone else is not the same as choosing to include the listener in our own private lives. Some of us never learned healthy boundaries about what is safe to share, and when, and with whom. We, or others, can be harmed by indiscriminate broadcasting of embarrassing, illegal, or otherwise sensitive information. The kind of storytelling I’m talking about, on the other hand, is as much about the journey as it is the facts.

Stories can get us through dark times by giving us hope and inspiring empathy. Stories work by creating a bond between the narrator or central character and the listener/reader. Who wants to read a story about a person you care nothing about? And if that appealing character has a different history or journey, or learns something the reader never experienced, so much the better. We accompany them into darkness and out again. END_OF_DOCUMENT_TOKEN_TO_BE_REPLACED

From time to time, I focus on an article that in my estimation offers valuable information or reflection on the stresses of the times. These last four years have presented one crisis after another. And now a pandemic that threatens not only my life and health, but those of my loved ones and friends. So it’s a good time to review what enhances our resilience and remind ourselves that we are indeed resourceful. We are not always so, and not all of us are at the same time. Not every piece of advice will seem appropriate to each of us. One of the many benefits of community is that we can remind one another of our strength, we can role model sanity and self-care, and those of us who have hope at any given moment can carry those of us who are mired in despair through the dark hours.

We’ll get through this. Together.

On to the article: This is by Craig Polizzi, a PhD Student in Clinical Psychology, and Steven Jay Lynn, Distinguished Professor of Psychology, both at Binghamton University, State University of New York.

The authors highlight three strategies we might use to reduce stress and rebuild our lives, even while the pandemic is still raging. This is going to go on for a while, folks, so let’s see what we can do to make the best of this episode in our lives.

Cognitive reappraisal involves reframing the way one interprets an emotional or stressful event or situation to regulate or neutralize its harmful impact. You can think about working from home, for example, as an opportunity to spend more time with family, engage in hobbies or get caught up on projects, rather than as a threat to job security. This strategy tempers the kind of all-or-nothing thinking – such as “the world is unsafe,” “I cannot do anything to help” and “our leaders know nothing” – that can take people down a road of anxiety, worry and mistrust of others. Instead, reappraisal helps you move toward healthy perspectives on stressful situations, dampens negative emotions and boosts positive emotions and keenness to participate fully in life.

Problem-focused coping can be another helpful strategy. It frames a stressful situation as a problem to be solved and fuels planning and the search for practical solutions. For example, people who know they feel worried or depressed after consuming news can plan to monitor and control the timing (such as not before sleep), nature and amount of news they consume. Effective problem-solving increases positive emotions, self-confidence and motivation. It also lessens the psychological impact of stressors.
As society opens up, you need to weigh the pros and cons of shopping, eating in restaurants, or seeking medical treatment, informed by the best available evidence. Problem-focused coping can help you make decisions about whether an activity is safe and consistent with your personal values and the needs of others.

Lovingkindness meditation can help you get through trying times. It involves contemplating and generating positive feelings and tolerance towards yourself and others. Combining lovingkindness meditation with empathy for those with different political views, for example, can help heal frayed bonds of friendship when social support is most needed. Pausing each day to embrace love and kindness counteracts self-blame, guilt, feelings of alienation and social isolation.

And anything that increases the amount of compassion and love in the world is surely a good thing.
For the complete article, click on the title link.