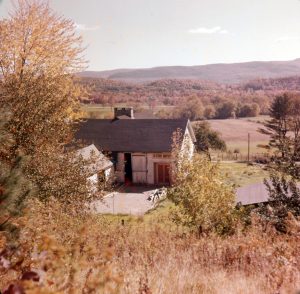 Part of the reason my father wanted to own a Barn was so that he could experiment with it. Try things out. Like trapezes. Or gardens. Some of his experiments worked brilliantly; some of them, not so much. One of the more interesting ones was a floor treatment, if that’s what you could call it. Dad cut one-inch slices of 2x4s to use as tiles in the front entry room, what we called the tack room (in the days when the Barn was a working barn, it was where various animal-related gear had been stored). It was a good experiment, a sort of prototype. Dad had big plans, see. For the kitchen.
The kitchen, as I have said elsewhere, was big: maybe 30 feet by 40 feet. And Dad wanted to use blocks for the flooring. But not 2×4 slices. Dad ordered a huge number of slightly smaller wooden blocks–3″ x 1 1/2″ x 3/4″ deep–made of oak, stained a dark brown and chemically treated to be fire retardant. When the blocks arrived we “seasoned” them–which is to say, stored them in huge stacks in the living room for months, until the chemical smell of the blocks gentled a little. Dad had ordered 40,000 of them, so even in tidy stacks it was a lot of wood.
When the wood was adequately cured, Dad prepped the floor by laying down long 1 x 1 inch strips of pine in a 3 foot grid, so the floor looked as though it was a vast checkerboard. Then the tubs of dull tan flooring cement came out, and that stuff smelled far worse than the blocks had at any time (I sometimes wonder how many brain cells the fumes cost us). Then, square by square, Dad laid the floor. It was a special treat if you got to lay a couple of rows of blocks (at least Dad thought it was a special treat, as many years later he used to offer me the treat of trimming his beard). So the floor got laid in tidy squares of dark oak. tightly packed together. Eventually he planned to seal them with a coat or three of polyurethane, but first he wanted the floor to cure–which I took to mean, let the smell of blocks-and-cement fade.
That was in September. We were still living in New York and going up to the country on weekends. In wintertime one of the last things we did before we left the Barn every weekend was to drain the pipes in case of a freeze. When water freezes it increases in volume, and water in pipes will burst the pipes and, when the water thaws, flood your house. But it wasn’t winter yet. No need to drain the pipes until December, at the earliest.
You see where this is going, right? A freeze hit in early November. We drove up as usual one Friday night. Dad got out of the car to turn on the lights and stopped dead in the doorway, causing one of those three-car pileups as Mom, my brother and I slammed into him. We looked, and as we were looking Dad stepped carefully into the room and sat down on the stairs. I don’t think he was crying, but he must have wanted to.
I’ve calculated that Dad used 38,400 blocks, give or take. The water from the broken pipe had flooded the entire kitchen floor; the unsealed blocks soaked up the water, swelled, and popped. The whole floor was a sea of warped blocks in mounds and piles. The work of that weekend became all about pulling up the few remaining cemented blocks and clearing up the swollen, sodden, warped remains of the kitchen floor.
The next week Dad started planning the new kitchen floor. This time he’d use flagstones. It required pouring cement reinforcing columns in the basement to handle the weight, but by God, that floor was going to be water resistant. What did we do with all the ruined blocks? Even when they dried out sufficiently, we couldn’t burn them (that pesky fire-retardant treatment). Most of them had been warped beyond the point where you could use them for much (although Dad did build a handsome chessboard out of some). Some were toted off to the dump, but for years after the great block debacle blocks remained, here and there; I think Dad hoped he’d find a use for them. Waste not, want not.

This was originally published at Book View Cafe.