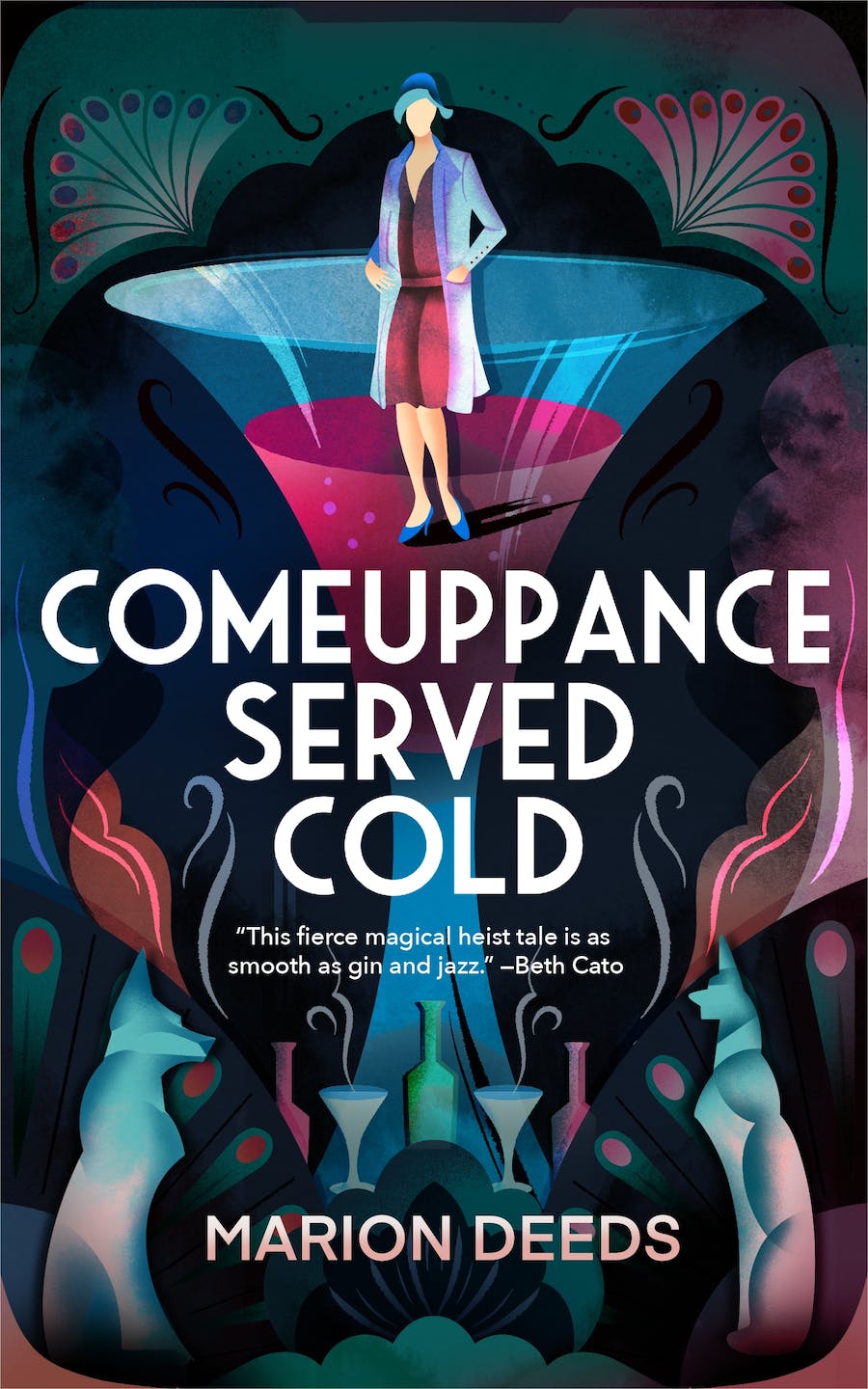 I heard Marion Deeds read from her novella Comeuppance Served Cold – just out from Tor – at one of last year’s FOGcon virtual readings. During the question period afterwards, I asked, “So is this homage to Dashiell Hammett?”

She was pleased that I picked up on the tone of the book. As she noted in the acknowledgements, Hammett’s take on the West Coast wealthy during the 1920s and 30s provided inspiration.

So while this book is fantasy – complete with magicians, shapeshifters, and a hint of the Fair Folk – it takes place in the corrupt worlds of human power that the noir and detective stories of the Prohibition years made famous.

It’s a delightful book. Some of its biggest charms are things that would be spoilers, so let me just say that if you like the idea of urban fantasy set in Hammett’s world, you won’t be disappointed.

One charm that’s not really a spoiler is that while some of the magic is intertwined with the political power dealing common to such books, the story includes the racism and other ugly reality of the non-magical side of things.

Shapeshifters are treated badly in this magical world even though many of them served valiantly in World War I, but this is in addition to, rather than an allegory for, the abusive treatment of African Americans.

One of the main characters is a Black woman who runs a speakeasy. She’s connected to the magical world – her late husband was an herbalist and her brother is a shapeshifter – but her affairs are typical of those of someone running an illegal business in ordinary human lives.

Likewise there are same sex relationships, and nasty references to those by other characters in the book.

The main character, Dolly White, is hired to “nursemaid” a young woman running wild – a common plot of noir and detective stories back in those days, though usually the person hired was not a woman.

The person who hires her is the commissioner of magic, someone close to but not exactly part of the government of Seattle. He wields a great deal of power, based in part on some magical work he did for the war effort, and assumes he has the right to all of it.

When Dolly observes that they don’t regulate and license magic in California, he snaps, “California is a hotbed of magical crime.”

His son comes across as even more unpleasant.

There’s more to Dolly than it appears in the first few pages, but that would get us into spoilers.

Another delightful feature of the book is that it is not told in chronological order. Each section is dated in reference to the first scene in the book, but there is quite a bit of jumping around over about six weeks in the fall of 1929 around the time the stock market crashed.

And that’s all I’m going to tell you. You’ll have to pick up a copy to find out more.

This is the latest in the ongoing series of novellas being published by Tordotcom. I am so glad to see novellas becoming a serious part of the publishing landscape these days.

They lend themselves to series, as with Martha Wells’s Murderbot books and Nnedi Okorafor’s Binti stories.