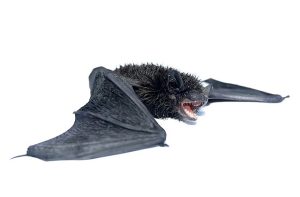 Last week I went east for my father’s memorial party, and got to see what had become of the house I grew up in.  Which is not a house, but a barn.  The new owners have done simply fabulous things, but I remember it when it looked like, well, a barn.  Growing up in a barn gives you anecdotes, so I’m going to occasionally share one here.

Case in point: we had bats. Many of the rooms (including mine) did not have actual walls for some years–just two-by-four studding. And when your ceilings are 45 feet high and not insulated, bats think this is a cozy place to hang, and they do. Even by the time we gained interior walls (once we’d moved up to Massachusetts full time, when I was 13) we still had indoor livestock, because it is almost impossible to seal off a barn the way you do a standard house. So: bats, and their discontent.

My father, at this point, spent three or four days a week in New York, working, while the rest of us lived in Massachusetts.  My mother, always anxious by nature, was generally poised for country-related disasters to occur when Dad was out of town. One afternoon, just as my brother and Mom and I were about to leave to go into town, Mom spied a bat fluttering around near the ceiling. There was a good 30 feet between the bat and the rest of us, but someone had told Mom that any bat that flies during the day is rabid, and she went into full alert mode. Full alert mode, in this case, meant a determination to kill the bat. Which was 30 feet above our heads. Mom thought fast and improvisationally: we had several cans of wasp spray with a 20-foot range, meant to coat the outside of wasp nests from a safe distance.  Mom had my brother and me spray this toxic gunk in the bat’s direction, and it must have had some effect, because eventually the bat fluttered woozily down from the safety of the ceiling into the kitchen (which was a huge room, open to the hallway) to land, panting, on one of the kitchen windows.

A note about the windows in the barn: they were all custom-made dual pane windows with custom screens, relics of a time when my parents were flush.

The bat, tiny little sides heaving, clung to the screen. My mother, still determined to kill the bat before it killed us, instructed my brother to get the CO2 pistol we kept for target shooting outside. Now, my brother and I had been instructed, on pain of extreme paternal wrath, never ever EVER to shoot the CO2 gun inside. Period. We pointed this out to my mother, but she was unmoved. “Get the CO2 gun,” she insisted. “I’ll handle your father.” (At this point I should have realized we were in trouble.)

My brother got the gun, got about three feet from the bat, and put a BB pellet through the bat, the two panes of glass, the screen, and–I think–nicked some bark from a tree outside. At which point two things happened:

Mom had not actually understood the mechanics of a CO2 gun. “I didn’t know it shot pellets! I thought you were going to gas the bat to death!”

Mom was pretty much useless. She sat at the kitchen table shaking her head. I sent my brother to get a butterfly net and use it to carry the bat outside for disposal (in the unlikely event that it was, in fact, rabid). And I got to call my father. Dad was of the old school, telephone call-wise: he disliked talking on the phone, particularly at mid-day long-distance rates.  Still, the story wasn’t going to get any better for waiting, so I called his office in New York and explained what had happened.

Dad laughed for three minutes at mid-day long-distance rates. My mother had a drink. The bat was disposed of.  Everything went back, more or less, to normal. But it did take seven years for my parents to replace the window; every winter when there was a draft I thought of the bat…