Getting out in nature is supposed to be good for your health. The Japanese even came up with a name for it: Forest Bathing. The most recent issue of New Scientist discusses another aspect: the importance of water — as in rivers, lakes, and oceans — to human well-being.

We just spent several days at Salt Point State Park, which is up Highway 1 about eighty miles north of San Francisco. Our campsite was in the tress — including some redwoods — but the trail to the ocean was less than a mile long. So we spent lots of time surrounded by trees and staring out at the ocean.

Not, I hasten to add, swimming in the ocean. After you watch the waves crash into the rocks, you begin to understand all the warnings about staying out of the water.

I took a few pictures while we hiked around. My favorite one has nothing to do with the ocean, except that I took it on the steps of the visitor center for Salt Point. 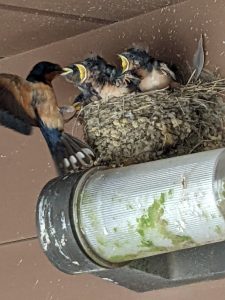 I was focused on the baby birds. The swallow landing to feed them happened just as I snapped the shot. I didn’t actually see the parent bird until I looked at the picture.

Ravens are also common in this part of California. They’re quite a bit larger than their cousins the crows who live in our neighborhood. I noticed that a raven does a loud call at dawn, similar to the ones crows do around here. It might have been this one, which we saw at Gerstle Cove, which is the ocean part of Salt Point State Park. 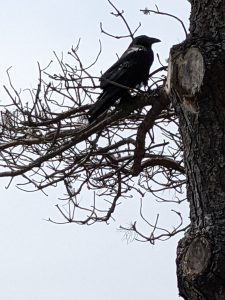 As for the ocean itself: Who came up with that name? There is nothing pacifying about the Pacific Ocean. Even on a calm day with not a storm in sight, the waves crash ferociously onto the rocks along the coast. I tried to catch one of the really large ones with my camera, but alas, I didn’t have the luck I had with the swallows. So here is a picture of it looking deceptively mild: 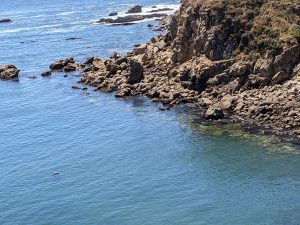 On our way home, we stopped by Fort Ross, which was originally a Russian fort. Yes, the Russians set up a settlement just up the ocean from San Francisco on lands belonging to the Kashaya Pomo people. The Russians were there from 1812 to 1841.

As we poked around the compound, I got to thinking how recent this history really is. Two hundred years is not a long time ago, but yet this fort is treated as if it is something ancient. The United States is really a very young country. Of course, the indigenous history of this continent is long and deep, but as a country we don’t take that into consideration.

The last thing I took a photo of on our trip looks just like a rock formation. It is, in fact, a blueschist rock formation, one that is mostly very rough except for the black streaks on it, which are as smooth as marble. 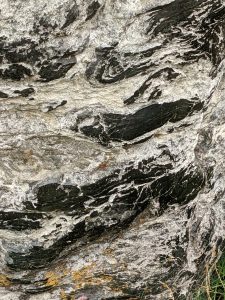 The black streaks were made by mammoths scratching themselves against the rock, according to E. Breck Parkman, senior state archeologist for California State Parks. When you touch the rocks, you can really feel the difference in texture.

Mammoths went extinct in North America about 11,500 years ago. That seems more important that what one group of humans did 2oo years back.

And as my sweetheart said, touching that rock is as close as I’ll ever get to a real mammoth.

2 thoughts on “Getting Out of Town”