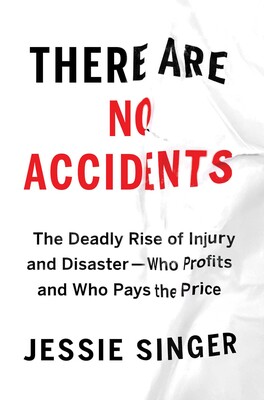 When I read nonfiction, I usually have one of three responses:

But when I read There Are No Accidents by Jessie Singer, I had a fourth reaction: I could have written this book. By which I mean I know something about most of what she covered and agreed with her analysis.

This isn’t jealousy – I haven’t done the research and interviews that she did and had no plans to write such a book. It’s gratitude. Not only did she pull all those points together in an excellent book, but also she let me realize that I am not a lone voice crying into the wind on a number of subjects related to “accidents.”

The whole point of this book is that so many things we dismiss as accidents – including the ones that cause serious injury and death – are in fact the result of terrible systems that build acceptance of a certain number of deaths into their design.

Singer came to this subject because her best friend was killed by a drunk motorist when riding his bicycle. In looking into the circumstances, she realized that the supposedly safe bike path her friend was using was in fact not protected from bad drivers.

In this country, transportation has been built around the car, and the design of our systems sacrifices safety for speed and ease of car use. We blame the resulting “accidents” on bad driving – or on bad bicycling or bad walking.

Speaking as someone who drives a car, rides a bike, and walks, I can guarantee you that everyone who does those things makes mistakes, even if we’re cold sober. We get distracted. We screw up shifting gears on the bike. We look down at our phones while crossing the street.

Based on my experience – and I have fortunately never been injured in a car accident – I think we make the most mistakes while driving because it is virtually impossible to pay attention to everything we need to do, and it gets harder the faster you go.

By the way, did you know that the speed limit on highways is calculated by figuring out how fast the fastest 15 percent of drivers drive, and then setting the limit at the lowest speed for that 15 percent? This is one of the things in the book I didn’t know, though I often feel the speed limit on highways is too high for the amount of traffic and the quality of the road.

As Singer points out, before cars roads were used by all forms of transportation, including walking. But the car companies pushed the idea that the rules should favor cars, inventing the idea of the “jaywalker” and putting bicyclists and others at greater risk.

We could design systems that favor walkers and bikers. Some countries in Europe do a nice job of this. We could also do a great deal more with public transit in cities. And we could stop making cars that make it very difficult for drivers to see pedestrians, such as the oversized SUVs that are common in U.S. cities.

I live in a very walkable city in a state that purports to require cars to stop for all pedestrians and I take my life into my hands when crossing some major streets at a crosswalk with the light in my favor.

Singer doesn’t stop with the systems that underlie the 42,000 traffic deaths each year in the U.S., a number that increased during the pandemic. She looks at many other kinds of problems that have systemic roots, from airplane crashes caused by a known defect to the errors that led to the Three Mile Island nuclear reactor meltdown to deaths in hospitals.

She talks about things that should be regulated and about the use of tort law (personal injury and product liability suits) to push companies to do a better job of protecting their customers. This is another area I know well, since I spent years working on publications that dealt with product liability and regulation. Her takes are very accurate.

What may have impressed me most about the book was her section on prevention, which included a discussion of falling. There is a great deal of concern in the world about elderly people and falls, because the injuries can be quite serious and even fatal.

But the response is not to tell people “don’t fall.” That’s impossible. Everybody falls. You’re going to trip on the sidewalk or miss a step going downstairs or even faint.

Singer’s solution is the same as mine: teach people how to fall. I’ve been saying this for years and have even done a little of it. There are some very basic rules, such as tuck your chin so you don’t hit the back of your head and don’t try to break your fall with your hand and wrist alone – use your whole forearm.

Hitting the back of your head causes concussions. Wrists break easily; forearms don’t.

I don’t think I’ve ever read a book before that managed to incorporate my pedestrian rights attitude (and rage at car culture), my legal reporting experience, and my Aikido background.

Anyway, I highly recommend There Are No Accidents. It’s time to change the idea that certain kinds of risks are acceptable and time to stop putting the responsibility for minimizing those risks on individuals.

We can have safe roads, safe products, safe underlying systems, but we have to begin by deciding we won’t tolerate so many deaths that could be prevented. Given that we’re apparently on track to “tolerate” the number of deaths the country suffered on September 11 every week due to our lack of good public health polices on the pandemic, I suspect it will be hard to get people to understand that we don’t have to put up with so much suffering.

It was, in fact, my rage over the indifference to the Covid death rate that motivated me to pick up Singer’s book. Now I’m thinking that we have to address many more defective systems.

By the way, I’ve been putting “accidents” in scare quotes because that’s Singer’s theory: these things aren’t accidents. We can build systems that minimize the risk from human mistakes – the kind of mistakes everyone makes. We don’t.

That’s not an accident.