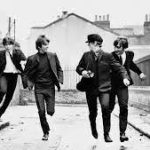 I was ten when A Hard Day’s Night came out. It played for about a year at the Village Cinema, four blocks from my house in Greenwich Village. The Village Cinema was a little art house, and while my mother was not against dropping the kids at the movies (I was 10, my brother was 8) especially during the summer when it was hot and there was air conditioning, she preferred to do it at the Waverly or the Loews Sheraton (both larger, with a larger, more supervisory staff to make sure we wouldn’t be spirited away). I think she found the Village Cinema–what was called an “art house” in those days, a little skeevy. In any case, neither my mother nor my father was enthused by the idea of taking us themselves and spending two hours watching what they anticipated would be a standard teen-pop-star movie.

Enter my Aunt Julie. Julie is my mother’s younger sister. She not only didn’t balk at taking us to the movie, she was delighted. By the time she came to visit we were in Massachusetts for the summer, so the three of us went to the Mahaiwe, the local theatre in Great Barrington, to see it. The rest, as far as we were concerned, was history. The three of us came home afterwards singing and quoting lines (“I now declare this bridge open…”) and within a week or two my mother, at least, gave in to the siren call of upbeat music and my aunt’s enthusiastic recommendation, and she began quoting from it as well. My grandmother called to ask me what the refrain of “he’s very clean,” referring to Paul’s grandfather, was all about. I saw Hard Day’s Night a good dozen times over the next year, and whole chunks of the dialogue moved into our household vernacular.

Mumblety years later, I married my husband, one of the great Beatles aficionados–the sort of guy who has all the bootlegs and alternate pressings and can identify the recording tricks and talk your arm off about them. And thus it came to pass that my children were raised with the music, and the movies, and began to quote from Hard Day’s Night and Help and Yellow Submarine.

This weekend I went down to LA to visit my Aunt, and to see my brother, who was also visiting her. My aunt is 96, and her memory is… not great. But the four of us–my brother, my daughter, my aunt and I, watched A Hard Day’s Night. It is as lovely as I remember–as funny, as fast, and charming. My aunt may not have completely kept up with the plot (what plot?), but she still remembered the music, and laughed at so many of the lines. My daughter was amused to realize that the whole thing was scripted–when she was small she assumed that’s how the Beatles spoke to each other all the time.* We had so much fun.

Going on 60 years later, the Beatles are still bringing us together.

__________
* That it sounded like that was no fluke: Alun Owen, the screenwriter, spent a couple of weeks with the Beatles before he sat down to write, and it appears he got it right.

One thought on “Very Clean”