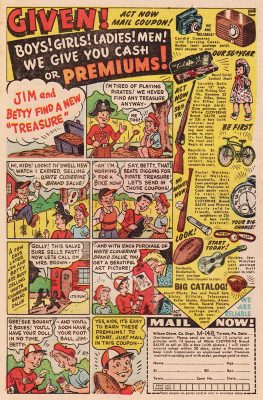 When I was a kid my brother and I collected comic books in great quantity. Collected and read and re-read and read the letters columns and the ads, entirely uncritically. Until I learned better.

In those bygone days a company called Wilson Chemical advertised heavily in comic books, persuading kids they could WIN PRIZES and MAKE MONEY by selling Wilson Chemical’s Cloverine Salve (which was, as near as I can tell, petroleum jelly). There were pictures of all the fabulous prizes you could win, and very often there were little quizzes. It was implied that if you gave all the right answers to a quiz you would win some gimcrack item that caught your eye.

I love idiot quizzes. Still. The only thing that keeps me from clicking on the link to yet another “What Kind of Coffee Drinker Are You?” or “What’s Your Love Language?” quiz is sad experience and a little understanding of how the Internet works.

When I was nine I was singularly lacking in experience (and there was no Internet). I liked knowing the answers to stupid quizzes, and maybe I even wanted the pressed tin ring that was my prize for saying “Betsy Ross” instead of “Martha Washington.

So I filled out the form and mailed it in. Two weeks later I got a bulky package from Wilson Chemical with 12 cans of Cloverine Salve and a pressed tin ring that was even less impressive than I expected. I had no idea that I had entered into a business dealing; I put the package on the shelf and went and did other things. Until I started getting threatening letters from the Wilson Chemical Company and, shamefacedly, brought the whole concern to my father.

This could not have been the first time a kid had sent away for a prize and been nonplussed by what she received. The company knew it was advertising to children (there was a place on the form to put your age) and had been doing this for years. But my father rose to a level of magnificent outrage–and I recently found a carbon copy of his letter to Mr. George C. Wilson III of Wilson Chemical Company.

“I am returning to you under separate cover the package of White Cloverine Salve you so cleverly tricked my nine year old daughter int receiving.

I would have thought that this kind of shabby, old-fashioned medicine-man kind of obscure cure peddling would have been outlawed long ago…

…You are asking children to take advantage of their own and their parents good standing in their neighborhood … it seems to me to be nothing more than a business based on a folksy, neighborly blackmail….

From the careful phrasing of the stickers on your catalog I would assume that I am not the only irate parent who has returned the unsolicited package to you. The one package I am returning might previously have been sent to five or a dozen children in other families in this country. Each child would, as mine did, open the carton and the top can of your jelly to see what was there.

[He finishes] I will expect the cost of mailing this package back to you refunded to me and I sincerely hope never to receive any of your products in my home again.”

There is also a copy of the letter Mr. George C. Wilson III sent in reply, with a good deal of pearl-clutching about the notion that cans of Cloverine Salve might be sent out, opened, returned, sent out again, returned, ad nauseam. He didn’t actually say that they weren’t. He enclosed a copy of the form I submitted, “requesting us to ship on order of Cloverine Salve out to her on trust.” In the fine print, below the “Check Only Four of the Six Famous Americans” boxes above.

So I learned that 1) I should always read the fine print and avoid quizzes, and 2) that my father had my back. When roused to anger, Dad really was a poet of sorts.

Nancy is a featured reader along with San Francisco author Claire Light, and Madeleine and Gillian are part of the rapid-fire readers participating in FOGcon’s ongoing virtual event program.

The current schedule is three rapid readers, followed by Claire, then a break before three more rapid readers. Nancy will close the readings. There will be time for questions and the event will close with breakout rooms with each of the featured readers.

All of this takes place on Zoom. Register here to get the Zoom link.