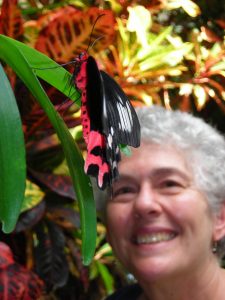 A confession: I like to read at bedtime. In this company, that’s nothing unusual. All the sleep hygiene experts say not to, that beds should be used for sleeping and only one other activity. What do they know? I find something deeply comforting about curling up with a good–but not too exciting–book. Perhaps it evokes memories of my mother reading aloud to me, or it’s just “me time.”

Often I include in my nightly reading a page or two of something that stretches my mind. I don’t mean that in the intellectual sense, for I definitely want to be quieting my thoughts, not forcing myself to think critically. I try to choose books that get inside my brains and stretch them gently in unexpected directions, like mental yoga before settling into my comfort reading.

An example of this kind of reading is Natalie Goldberg’s LONG QUIET HIGHWAY. Goldberg is a writing teacher, essayist and novelist who is also a long-time student of Zen Buddhism. I was introduced to her work years ago with her WRITING DOWN THE BONES, and had always thought of her as a teacher in the style of Julia Cameron: “Morning pages,” keep the pen moving, let your thoughts flow, that sort of advice. LONG QUIET HIGHWAY is autobiographical rather than instructive. I was deeply moved by how she put together mundane, specific details in ways that brought tears to my eyes. More than that, she has gotten me thinking — or rather, feeling/sensing — more deeply about the role of writing in my own life. Yes, it’s a pleasure and an obsession; yes, it’s my occupation, how I earn my living.

I have no easy answers, but I will be watching myself–my self–more closely as I write. And who knows, I might even achieve a new literary Downward-Facing Dog.

We subscribe to New Scientist, the British science magazine that provides short reports on newsworthy bits of research worldwide, several excellent columnists, and a couple of deep dives into important topics each week.

Reading each issue will remind you that our Earth is complex and interconnected and that we human beings have not come close to knowing everything there is to know about the place or, indeed, about ourselves.

Likewise, each issue will make it clear that the Universe is so vast as to be far beyond our comprehension and knowledge, at least now. We have only bits of knowledge about our little solar system, much less the Milky Way galaxy in which we reside, and both those are small potatoes within the Universe as a whole.

I also practice meditation. Of late, I’ve been meditating in the way taught by Master Li Junfeng of Sheng Zhen, which translates as the path of unconditional love, and am currently taking an online class from him to learn a form known as Heaven Earth Heart Contemplation.

When we meditate, we draw on the Earth and the Universe. As I start, I often think of the Earth – its molten core, the tectonic plates, everything from mountains to deserts to wetlands, the oceans and all the creatures – and then go out toward the Universe until I feel that I am one with the Universe.

And at the same time, I feel like I am a tiny speck in that Universe, that even the Earth is a tiny speck in it. Oddly, I find this very comforting. All those things we take so very seriously – even those on the level of life and death – don’t matter so much when I feel like this tiny bit of stardust.

That is, I come to the same place from both meditation and thinking about physics. END_OF_DOCUMENT_TOKEN_TO_BE_REPLACED

We need to slow down.

I did a virtual meditation retreat for most of November and I have continued meditating every day. It’s done wonders for my state of mind – moderated my panic levels down as the pandemic shows how exponential math really works, kept me calm in the ongoing political chaos, kept me from worrying about all the things that freak me out at three in the morning (mostly death and money).

But it’s done something else. I have come to realize that meditation, centering, finding that space of calmness, all those things are about much more than making it possible for an individual to live in this over-complicated world or even attaining enlightenment. Those practices are also about changing our attitudes in dealing with the world.

They remind us to slow down and do things deliberately. Multitasking doesn’t work — virtually no one can do more than one thing at a time well. Rushing from thing to thing without taking breaks in between just makes us all feel harried. We rush around to do things and nothing works.

This may seem counterintuitive when we’re in crisis. We need a fix now for so many things. Certainly those working on vaccines and treatments need to focus on their research, but even they need to take regular breaks. Other research has shown that breaks and sleep make it more possible to make progress. And god knows our health care workers on the front lines need a lot of breaks and rest. Unfortunately, many of them are overworked.

Then there are the people who are working multiple jobs just to make sure they have shelter and food; they may not even be getting health care despite all that work. As more people work from home and keep their children home during the pandemic, some are doing even more than they were doing before. This is not healthy for any of them.

Unions in the U.S. often remind us that they gave us the weekend. In Melbourne, Victoria, Australia, there is a statue that celebrates unions and 8/8/8: 8 hours for work, 8 hours for sleep, 8 hours for ourselves. In Australia, where unions still have power, people can make a decent living working 8 hours a day. I’m sure there are people there who are also being squeezed, but perhaps not as many as in the U.S.

But 8 hours a day working in a job over which you have little control and no ownership interest? It’s better than working 15 hours or more a day, but it’s still not what people really want. END_OF_DOCUMENT_TOKEN_TO_BE_REPLACED

I mentioned last week that I had signed up for an 18-day virtual meditation retreat that started on Election Day.

It was the smartest thing I’ve done all year.

I was a little stressed as I watched returns on Election Day itself; I remember 2016 all too well. But on Wednesday, when it started to become obvious that the Biden-Harris team was going to win, I got calm.

And I’ve stayed that way.

It’s not that I’m sanguine about all the challenges ahead. I already sent money to Fair Fight Action for the Georgia Senate runoffs.

I’m worried about a lot of things. The Republicans seem to have become a cult. The moderate Democrats seem to be under the illusion that we can just go back to “normal” even though it’s obvious that ship has sailed.

And while our local races here in Oakland went well — we’re going to have a more progressive city council this time around — that just means that we’ve got a better chance of getting our voices heard. It doesn’t mean we don’t have to work to get something meaningful done.

I’m concerned about a lot of things, but I’m not freaking out. And that is truly wonderful. END_OF_DOCUMENT_TOKEN_TO_BE_REPLACED

A couple of weeks ago, Gillian Polack wrote about what makes a book great comfort reading, one you want to read over and over, especially when things are difficult.

Then Madeleine Robins wrote about “fluffy bunnies” – books, television, and movies that provide balm to your soul.  A story doesn’t have to be “nice” to be fluffy this way.

I’ve got some favorite comfort reads as well, and I’ll get to them in a minute. But first I want to talk about something else I just did to improve my comfort levels: I signed up for an 18-day virtual meditation retreat.

It started on Election Day. At 6 am. In fact, I have to get up for a 6 am one-hour session every day until November 20.

Even though I spent 22 years of my life going to Aikido at 7 am, I never became a morning person. I hate alarm clocks. I hate getting out of bed. By the time morning rolls around, I’m usually very comfortable and see no point in jumping up to meet the world.

That I signed up for this retreat shows you just how desperate I am to get back on center. The pandemic and the election have done a number on me.

It’s not that I don’t know how to meditate already. In fact, the retreat is led by Qigong Master Li Junfeng, with whom I studied when I lived in Austin. I could easily meditate on my own.

Except I haven’t been. Part of the purpose of signing up was to get into a habit. The other part was to get some inspiration from Master Li. He’s a joyful man and joy is good.