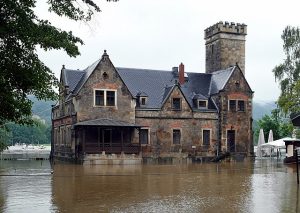 Everyone in California is dealing with wildfires right now (along with the pre-existing catastrophes of this stellar year and yes that was sarcastic, 2020 you train wreck) so of course I’m thinking about floods. (I’m thinking about floods, actually, because my friend Kate in Ireland recounted, elsewhere, the epic tale of the back yard drain clogging up and thereby soaking the floor in her mother’s apartment, and…). Kate’s house is built into a hillside, and because gravity works, water runs downhill into the yard and… squish. Wet rug, to say the least.

I’m familiar–very familiar–with this situation. I was raised, at least in part, in a Barn–a sort of extended weekend project of my highly creative father’s, that started out as a working double barn and wound up as a 60s-inflected House Beautiful. I have written elsewhere about many of the exploits at the Barn (always capitalized in the specific) but not the water problem. The Barn, like my friend Kate’s house, was built into a mountain, and in spring, when the snow had melted, the cowbarn–what normal people would call the basement–would flood. Sometimes significantly.

My first recollection of the “water rolls down hill” problem? Coming home from a grocery run with my mother when I was seven or eight, at the tail end of one of those flash East Coast storms, to find my grandmother in the hall of the Barn (which faced into the hillside, with a thirty-foot sliding door onto the patio) attempting to sweep the floodwaters out with a broom. There is something both heroic and ridiculous about a 65 year old woman attempting to push six inches of water out of the house by main force. If I recall correctly, Grannie was wearing slippers, and when she gave up the sweeping and padded upstairs, she **squished**. My mother, who had a remarkable imagination for improbable disasters, would not let us go down to the cowbarn to see how bad the water was there, for fear that we would be swept away and never seen again.

That was on the ground floor and after a downpour. But more often the water only affected the cowbarn, and it was a slow seeping that could drown the back half of it in six inches of muddy ick. To explain: the Barn was actually two barns built together (one dating from the 1830s, the other from the 1890s) with the newer barn facing away from the hillside. The two barns were separated by the massive stone chimney that extended from the cowbarn up three stories to the roof, and the “front” cowbarn had, fairly early on, been turned into my father’s weekend design studio, with a concrete floor. That floor stopped at the junction of the two barns, and the rear barn, with its packed-dirt floor, became a storage drop. And every spring it became a muddy storage drop. At one point, for reasons I no longer recall, we had 8 or 9 mattresses stored back there. They were great for climbing on. Until the rains came and the water wicked up through the bottom five mattresses, which over time began to mildew and… eew.

My father was not unaware of the problem. In fact, he devoted a good deal of his creative ingenuity to trying to find a solution. Water persists in flowing downhill, and the spring runoff was not going to stop just because it was inconveniencing us. There were several early attempts at solutions that involved hanging plastic sheeting (Dad was a big believer in plastic sheeting) along the interior wall. But it became clear that attempting to deal with the problem from the inside of the cowbarn wasn’t going to work. So Dad consulted with some experts who advised that a trench be dug on the outside of the wall, down feet and extending the full ridge of the cowbarn, and concrete be poured there to divert the waters. Which sounds like it should have worked, but didn’t quite–the water cleverly flowed around the ends of the slab and came in at the sides. Finally, at the same time that Dad had a concrete floor poured in the back of the cowbarn, some sort of drain was put in along the hillside wall to divert the water away from the house entirely, into a field on the other side of the driveway. At long last, success (although the field itself was sometimes distinctly squishy in the Spring).

I hope Kate’s mom is sleeping high and dry now. She doesn’t need yet another square on her 2020 BINGO card.