A couple of weeks ago, Gillian Polack wrote about what makes a book great comfort reading, one you want to read over and over, especially when things are difficult.

Then Madeleine Robins wrote about “fluffy bunnies” – books, television, and movies that provide balm to your soul.  A story doesn’t have to be “nice” to be fluffy this way.

I’ve got some favorite comfort reads as well, and I’ll get to them in a minute. But first I want to talk about something else I just did to improve my comfort levels: I signed up for an 18-day virtual meditation retreat.

It started on Election Day. At 6 am. In fact, I have to get up for a 6 am one-hour session every day until November 20.

Even though I spent 22 years of my life going to Aikido at 7 am, I never became a morning person. I hate alarm clocks. I hate getting out of bed. By the time morning rolls around, I’m usually very comfortable and see no point in jumping up to meet the world.

That I signed up for this retreat shows you just how desperate I am to get back on center. The pandemic and the election have done a number on me.

It’s not that I don’t know how to meditate already. In fact, the retreat is led by Qigong Master Li Junfeng, with whom I studied when I lived in Austin. I could easily meditate on my own.

Except I haven’t been. Part of the purpose of signing up was to get into a habit. The other part was to get some inspiration from Master Li. He’s a joyful man and joy is good.

Starting today (November 5, 2020), the website Social Justice at the Edge of Chaos is presenting a blog symposium. The symposium is curated by Beth Plutchak, a writer and visionary thinker with a background in economics and social justice.

As the introductory post explains, this symposium is part of an effort to bring the science of complex adaptive systems to bear on the difficult problems facing us today.

Treehouse resident Nancy Jane Moore will be participating in the symposium. Other participants include Debbie Notkin and Dr. Clare Hintz.

New essays will go up each day, followed by responses. The symposium continues through November.

Once the mandatory evacuation order was changed to a warning (aka “it’s okay to go back, just be ready to skedaddle at a moment’s notice”) we went back to our place several times to check things out and make plans on priorities before moving back. Although we were immensely relieved to have a house to come back to, we noticed the light coating of ash on the foliage and the smoky odor inside. Our insurance adjuster came out to the house a couple of days later and we did a walk-through. He pointed out a little ash here and there on the inside window sills, and among other things offered the cost of a professional smoke damage restoration company as part of the settlement. After speaking with several local companies, and returning to take a more careful look inside and out, we decided to clean it ourselves, with the help of local house cleaners, and use the difference to buy a HEPA filter vacuum cleaner, a shop vac, and several air purifiers.

The refrigerator and chest freezer had been without power for three weeks by this time. We hauled the refrigerator on to the back porch and, armed with rubber gloves and doubled trash bags, emptied it. This was a bigger operation than it sounds because we had to take the refrigerator freezer door off in order to fit it through the sliding glass door. The smell, while qualifying as “stench” was not as bad as we’d feared. More “funky” than “rotting carcass.” Most of what was in the fridge was either in glass or plastic containers or vegetables. Our friend up the block, a strict vegan, said hers didn’t smell that bad, more fermented than putrid. Within a short time, the freezer interior was covered with black flies. We left them to their work, freezer door open, and went back to our hotel. When we came back the next day, the smell had largely dissipated and the flies were gone.

The next step was to sanitize and deodorize the refrigerator. Up and down the block, folks were just trashing theirs, but we wanted to at least attempt to salvage ours. My husband did a first pass on the interior with pressure spraying full strength degreaser/cleanser, rinsing with (non potable) water, then wiping it down with dilute bleach. With the doors open, there was no smell, but when we closed the doors and left it for a time, the funky smell returned, albeit not as intense as before.

On social media, neighbors were comparing experiences cleaning their refrigerators. I felt heartened that some had had success. We did some research and found the following resources:

By mutual agreement, I took over the next phase. After studying the UFlorida article, I took a Costco-sized tin of decaf coffee grounds, which no one in the family drinks any longer), spread a thick layer on 3 old cookie sheets, put one on each rack, closed the doors. And turned on the refrigerator. The fridge was now in the house but not plugged in. I’m not sure why we didn’t think of that, but it turns out that circulating the air within the fridge is important to deodorizing.

I let the coffee grounds do their work for three days. By the second day, though, we could smell a distinct coffee tang but no other odors. The final steps involved re-enlisting my husband to clean the condenser, where icky stuff had dripped and then dried, and then do a two-day stint with baking soda to remove the coffee grounds.

The result: a clean-smelling, extremely clean refrigerator with quite a few years of life left in it.

The chest freezer was another matter. Because the interior had seams, it wasn’t possible to sanitize or clean it thoroughly. We called our trash collection service for a bulky item pick-up, then bought a new one. We got a frost-free upright this time.

Besides all this cleaning, we all went through a bit of unexpected grief about the loss of the contents of the appliances, particularly the blackberries my daughter and I had picked all summer, and the squash and green beans that were at the beginning of their harvest. We consoled ourselves that the blackberries would indeed return next summer, and this time we would be able to see them in the freezer better. Our squash plants had flourished in our absence and burst forth with a second harvest (actually on their third now) so I’ve frozen a dozen or so pints of summer squash and the same of green beans.

During this time, we had a small, office-sized refrigerator with a tiny freezer that we bought (with the money saved by cleaning the house ourselves), which has now gone to live in the garage beside the upright freezer. It was a great thing to have because it allowed us to take our time with the refrigerator clean-up, and we will now have a bit of extra cold space (for pears next year and overflow produce).

Through all this, we’ve developed a new appreciation for the convenience of being able to keep foods cold (and to grab an ice pack for a bruise). It’s a luxury that so many of us take for granted. Through most of human history and today in many areas of the world such a thing is unknown. Oddly enough, having my familiar refrigerator back makes this place seem much more like home. I wonder why that it is so.

I wrote out many thoughts on last weekend’s World Fantasy Convention, but something rather important has come up and I need to talk about it. It’s related to World Fantasy, true, but it’s also related to many other online conventions this year.

I could cause more problems if I listed the issues each and every convention has had or say nice things about the terrific conversations, but I shan’t do either. Instead, I shall give a small list of quite specific ideas to consider. These are the kinds of discussions that program people have or should have. (I’ve had them when programming. And yes, I made mistakes. The world is a big place and full of exceptional complexities.)

1. How do countries see their own various cultures? We can’t just take our own views and use them as a framework for the description of others. My favourite example of this is that people of Korean ancestry are from the dominant culture in Korea and the opposite in the US: a Korean and a Korean American have completely different experience in terms of prejudice and who society favours.

2. How do minorities see themselves, explain themselves, and why? The example I give on panels is often me, myself and I, for I am not the same Jewish as US Jewish and have some very interesting life experiences to prove it. Ask me about them, and ask me what elements of Australian history pushed me towards my self-description as off-white.

3. In any community, who are the experts on matters of culture? I’ve spent a large chunk of my life working on these things and some con-runners know this and ask me to be on panels or for advice. Others… don’t. The variations on ‘don’t’ can be entertaining but often make me feel like an outsider. I have other things to do than spend more of my life as an outsider (I am one anyway, so I don’t need to accept the gift of more outsider status) and move on to other things. We are all different people. Ask around and find out who knows what. (Ask me what my new PhD topic is, I dare you. It includes the words ‘culture’ and ‘genre fiction’. Ask anyone researching what their research is about.)

4. There are procedures and guidelines for working with so many minority cultures in so many countries. My favourites look a bit like this: https://www.australiacouncil.gov.au/workspace/uploads/files/writing-protocols-for-indigeno-5b4bfc67dd037.pdf This and a set of writing guidelines have been produced by the owners of the culture in order to make it possible for the rest of us to write without appropriation. While not all cultures have documents of this sort, they often have people who can be asked. It would be very useful if possible panellists know about policies and protocols and politics. It would also be useful if they could explain how one works with people of this culture or that. However, none of us know everything. Panellists should all know their limitations. That’s the bottom line. We need to know who we can speak for and who we should defer to on a given subject.

This is not a list of ten. It could be, but those four subjects are immense and enough to be getting on with.

If there’s one firm rule we have in this house, it’s that the dogs are not allowed on the sofa unless specifically invited. How, then, to explain this: 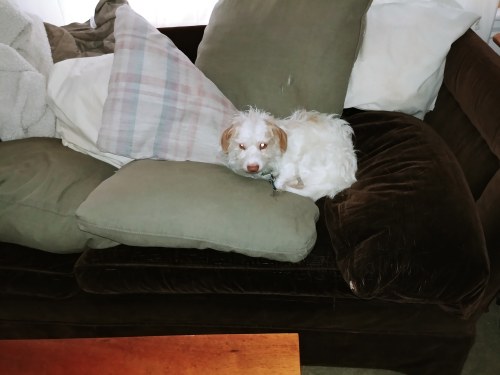 Also, no squirrels are allowed on the porch! 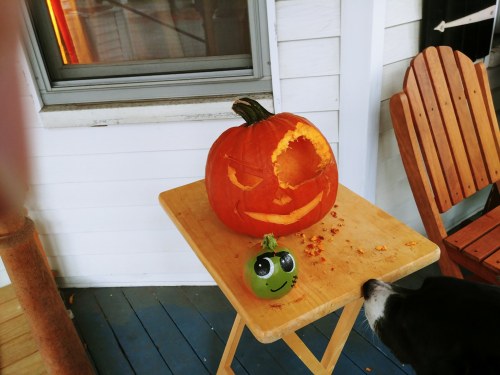 In case you wonder, I’m an emotional tightwire (like many of you), waiting to find out what’s going to happen on  U.S. election day—or, more likely, several weeks after election day. Will we step back from the precipice we’re dancing on? Will we put responsible adults in charge in Washington? Before we all die of Covid or drown in the melting ice caps? Will we save our democracy from our worst impulses?

I can’t stand the wait, and that’s why we’re getting dog pictures on the day before the election.