We walk along the curving path through the park, as she tells me the diagnosis, Max and Minnie trotting just ahead of us. They’ve put Minnie on prednisone, and it’s drastically improved her mood and behavior.  She’s not in pain any more.  But it’s only buying time.

The antics of the pups, as they investigate a particularly pungent patch of grass, lightens the mood.  It’s what dogs do. We give our hearts to our pets in ways we would never dare with another human, and they give us joy in return.  But the shadow hangs over every relationship, the knowledge that you will likely outlive them.  And even if you’re willing to do everything possible to keep them alive, at some point you have to ask yourself, who are you doing this for?  Your pet?  Or yourself?

A vet once told me that he’d never had anyone say “I acted too soon.”  Too often it’s, “I waited too long.”

They’re not going to try chemo, my friend says.  With her diagnosis, at best it would give them another year, most of which Minnie would spend feeling like hell.  Chemo isn’t easy for anyone, but especially for an animal that can’t understand what’s happening, or why you keep doing this to them.

My friend says that diffidently, as though she’s half-expecting to be told she should do and spend whatever it takes.  But I’ve been there, I know the guilt and grief that gets tangled in the decision-making process.  Even when they make it to an advanced age, we beg and bargain for more.

I’m going to give her the best months I can, my friend says.  But her voice quavers, her eyes filled with the anticipation of sorrow.

She’s only had Minnie slightly longer than I’ve had Max.  I try to imagine being faced with the same situation, and my heart hurts.

My friend is doing the right thing.  She knows that.  It’s still horrible.

“You’re fostering her,” I suggest, my own recent experiences shaping my words.  “Before her next home.  Giving her a base of love and affection, so she can take that next step without fear.”

It sounds hokey, the kind of thing you’d find on a sub-par Hallmark card, but there’s something about it that rings true.  They’re ours, and we’re theirs, but it’s not ownership.  It’s a trust.

My friend thinks about it for a few minutes, then nods.  I think that idea helps her, a little.  I hope it does.

I hope it will help me, when the time comes again. 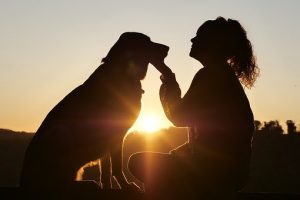 One thought on “A Different Kind of Fostering”