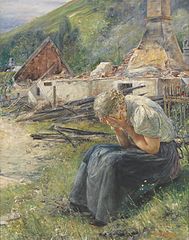 My opinion of the anti-vaxxers hasn’t budged. I’m angrier and less patient with them than I was before. I still want to blast them with their responsibility for the death of my friend and so many others. I don’t go all-out on this, however. I have more important emotional work to do, mourning the loss of my friend. END_OF_DOCUMENT_TOKEN_TO_BE_REPLACED

We walk along the curving path through the park, as she tells me the diagnosis, Max and Minnie trotting just ahead of us. They’ve put Minnie on prednisone, and it’s drastically improved her mood and behavior.  She’s not in pain any more.  But it’s only buying time. END_OF_DOCUMENT_TOKEN_TO_BE_REPLACED

About 15 years ago most of my jewelry was stolen. None of it was very valuable, although there were some pearls and jade and a little amber, and a lovely pair of moonstone in gold stud earrings that had some monetary value. But, as is the way of things, each piece had a story that was part of my life. That was their real value, and hence the deepest loss. I’d had some of them since my childhood, and some had been gifts from loved ones who’ve since died. Some of it was my mother’s.

I went through the expected rage and frenzy, scouring local flea markets in the forlorn hope that I might spot a piece or two. Of course, I did not. When that stage had run its course, the police report filed (and, doubtless, immediately tossed), anger turned to grief, and grief to acceptance, and acceptance to looking in a new way at what I’d lost.

I wrote in my journal that although the thieves had taken bits of minerals, crystals, shells, fossilized tree sap, they could not steal:

Slowly, over the years, I have acquired a new collection. It’s smaller and more suited to who I am now. I discovered a few things from my mother, tucked away in an old cigar box with some broken bits and things I didn’t wear. Friends and family surprised me with simple, beautiful pieces: a strand of black pearls, an amber pendant, a necklace of silver and garnet dangles, tiny, amazingly delicate garnet earrings. I went through a period of needing “replacements,” and then letting them go. My daughters and I have swapped a number of pairs of earrings. It’s such a delight to pass them on. And to realize I don’t truly need any of this.

I look at what I have, what I have lost, what cannot be taken from me, what I have gained. Yes, I enjoy beautiful things. How much more dear to me are the memories that come with them. And how much more precious are the lives of those who are oppressed and terrified and suffering today.