When I first started thinking about getting a dog, I knew that I wanted a companion who could come along with me on hikes.  I thought a lot about the physical characteristics I’d want – and kinda overlooked the mental elements.

Most healthy dogs will take a long walk with you. Not every dog is cut out to be a camping buddy, with its discomforts, intrusions by other people – and wildlife – and often unpredictable weather.I knew Max had the legs and stamina to keep up with me on a camping trip.  But would she enjoy it?

(Mei-Chan, my parents’ shih-tzu, nearly had a heart attack the first time she visited the suburbs, and discovered that the night got very dark outside the city).

Maxx’s first encounter with a tent had been under semi-controlled circumstances: a single night at a friend’s farm, where I was able to pitch the tent and entice Max to sleep in it without having to worry about the distractions of a populated campsite.  Other than nearly taking the tent down several times, as she tested this strange new “soft house” idea,  Max did about as well as could be expected.  Even when the heavens opened up at 3a.m. and made us relocate to the guest house.

But last weekend was the real test.  Four days, living semi-rough in a tent, with only a pillow-pad between us and the ground, and all the distracting sounds, sights, and smells a dog could hope for.  And Other People!  Would she be frightened and overwhelmed by everything?  Would she lay down by the car and refuse to move?  Or would she have fun?

I probably shouldn’t have worried.  Max remembered the tent, and hopped in and out like she’d been doing it her entire life, unworried by the soft walls and zippered door.  And while she still occasionally barked at people passing our campsite, she was calmer than I’d even hoped for.

Although she declined to use the dog bed I’d brought for her, instead insisting on sharing my sleeping bag.  Thanks, Max.

Not perfectly, however.  If she didn’t like the way someone looked (smelled) or moved, a quiet rumbling growl would start deep in her throat, fading away to grumbling when told, “stop it.’   We did a lot of ”stop it” that first night.  And she insisted on getting out of the tent twice, to sniff around and reassure herself. Tents are unnerving, if you’re a dog.  But she trusted me, and so, eventually, trusted the tent.

And when we had a nighttime visitor come sniffing around the tent in the small hours, rather than getting upset or stressed, Max simply got up from her position at my feet and lay down between me and the sniffed-at tent wall, and went back to sleep.  That was unexpected, and oddly heart-warming.

But the real test came on Saturday, when we set out for our full day hike.  I strapped her backpack on, just as we’d done a handful of times in the apartment and then on shorter walks, but for the first time loaded the pockets with her gear (treats, poo baggies,) and mine (keys), and a water bottle. Would she balk?

At first, yes. But once we’d gotten the two side backs weight-balanced, she seemed to realize that everyone was carrying a pack, and she was being included, and I swear to god you could see her attitude change, just like that.  Dogs like having jobs, and responsibilities.  Max decided that carrying things was hers.

Test two, passed.  I wasn’t going to have to pack up and take her home.  Whew.

But the real test was about to start.  Max likes to say hi to other dogs, and play with the whenever possible.  Would she be willing to ignore the other dogs we saw on the trail, and stick to the path?

To my great relief, yes. So long as  she could keep checking to make sure all members of her “pack” were staying close, and otherwise let her lead.  Trail dog is BOSSY.

And also triumphant, when we reached out destination. 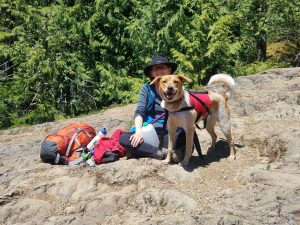 Next trip, we’re staying for a whole week.  We’ll see how she does….

One thought on “Have Dog, Will Hike? The First Adventure”