Back with Max was a pup, I got a doorbell (actually a strand of fabric with several bells on it) with the idea that when Max wanted to go out, she would go and ring the bell. In theory, it’s an excellent plan. And it even worked… For a while. Then Max realized that she could get my attention anytime she wanted it by ringing the bell, and did so. Repeatedly. All the time.

We got rid of the bells.

Flash forward the year, and I’ve been watching my friend Mary Robinette Kowal document how she is teaching her cat how to use “speaking” buttons to communicate. And I think to myself, that might actually be fun to try with Max. And then I remembered the bells incident, and I thought, maybe not.

But with Max’s board and train in the rearview mirror, I’m aware of the fact that S., Max’s trainer, is right: I have a very smart dog. And smart dogs need things to occupy their brains, otherwise they find things to occupy their brains. And those things are never pleasing to the human in the household. So I said the hell with it, and ordered their basic button kit. If it doesn’t work out, I figure I can hand it on to somebody else who wants to give it a try. 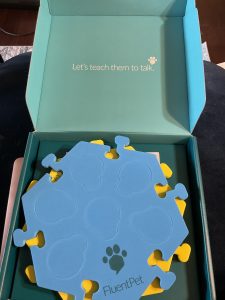 The kit is two buttons, which I can record a word or phrase on, and foam placemats to set the buttons in, to make them easier to use. So the first decision I had to make was, what two words were they going to use? It wasn’t a question of what I said to Max, but what I wanted her to say to me. After a few days of thinking, I settled on “toy,” and “out.” Toy, because  I will tell her to “get the toy,“ or “fetch the toy,“ and she knows what I mean. So I’m hoping that she will associate the word toy with a desire to play. “Out”

is kind of self-explanatory.

The plan is to start with these two, and eventually work her (our) way up to more abstract but useful concepts like “hungry,” “sleepy,” “mad” and “scared.”  Part of me is thinking like a dog owner – being able to know more specifically what’s going on in her doggy brain will help us interact better.  But part of me is also thinking like a writer, fascinated to see how an “alien” brain learns, using human tools and concepts…

Is this gonna work? Or is Max going to decide it’s a stupid game and she doesn’t want to play? I have no idea.

I guess we’ll find out next month.

It’s been a stressful week (month), even by the standards of the 2020’s. And in four days, I’m going to do something I swore I never would.  I am going to hand my dog over to a trainer, and walk away.  For three weeks.

They call it “board and train.”  We’ve been referring to it as “puppy boot camp.”

I’m stressing out about it, hard.

I know that I’ve taken Max a long way in 20 months.  She’s a sweet, loving, playful girl with excellent leash manners, she knows all her commands (even if she still has trouble with her recall), she’s a great car-ride companion, and is A+ at letting me know when she has to go out (and holding it, if I can’t get to her right that second).  And she hasn’t destroyed a single thing other than her own toys since she finished teething. She’s practically perfect, and the not-perfect….well, that’s just a matter of fine-tuning.

But she still reacts with fear-aggression under certain circumstances, and while I can handle it, that’s beyond my current paygrade to fix.

Part of me feels like I’ve failed, that I wasn’t “good enough” or attentive enough to be and do everything Max needs.  That somehow it’s my fault she has that particular quirk.

It’s not.  I’ve had trainers reassure me on that fact: dog brains are mysterious things, same as human brains, and sometimes they just… get wired a certain way.

Part of me believes if I’d put in a little more time, studied a little more, done more exercises, I could have done the rewiring myself.

And maybe I could have.  Probably I could have.  I know the basics, it would just require, well, a lot of time.  Constant, dedicated time. And I have a job (several, in fact) and a real need for sleep.

I’m reminding myself that just as writers need editors and copyeditors, sometimes puppies need a little extra help, too. Nobody’s good at everything, and we don’t have to be.

And Max isn’t going to love me any less for it.

So she will go to Puppy Boot Camp, spending three weeks with S., who will give her the 24-hour professional care and training needed to erase old habits and build new ones.  And when we are reunited, S. will teach me how to maintain and build on those.

And maybe, rather than boot camp, it will turn out to have been Officer Training School.

I’m going to miss her, a lot. But I also suspect the time will be well-spent, reconnecting with (spoiling) Castiel the Kitten of Thursday, and also writing a LOT in the time not spent exercising and training.  Which is good, because  I’m supposed to be writing the follow-up to SOMETHING PERFECT next month….

But until then, Max and I are keeping each other chill. 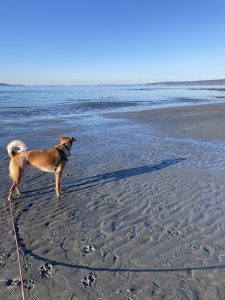