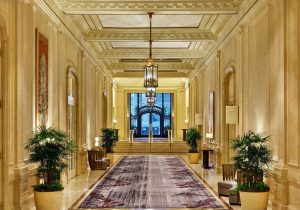 Cities are palimpsests. Growing up in New York, I saw constant evidence of this: tear down a building and there would be a painted advertisement from the early 1900s, or the brick outline of an earlier neighboring building. Restaurants that were a feature of my childhood streets are barely a memory now: gone. In New York the only constant, really, was change.

I don’t know any city as well as I know my home town, but I’ve gotten pretty settled in San Francisco, after nearly 20 years here. So a few years ago I started potching around with an idea for a fantasy novel set in San Francisco, which gave me an excuse to go places I hadn’t gone, or revisit places I’d been before, and start weaving them into the book.

And then came the pandemic.

You wouldn’t think that would be an issue, would you? Except that as I move around the city there are landmarks, locations that I’d already woven into the book, that are in that equivocal twilight state where you don’t know for sure that when everything is back to normal they’ll be back to normal with us. There’s a sequence in the book where Our Hero, Ivy, winds up holing up at the Palace Hotel on Market Street, avoiding Weird Evil Stuff. The Palace Hotel (actually the new Palace Hotel–the first one was built in 1875 and lost in the 1906 fire) is one of those lovely, slightly dowdy old buildings that is all marble and gilt and high ceilings and the odd velvet rope. You can get a very expensive drink at the Pied Piper Bar, home of an eponymous painting by Maxfield Parrish, or have tea in the Garden Court. Tres luxe.

I walked by the Palace today when I had to go downtown for work, and the Palace is closed. The website says “temporarily,” and with the hotel’s history I suspect it will reopen. I’m a little more concerned about some of the local joints that I mentioned in the manuscript. I can always re-write them if UpCider or Bill’s Place doesn’t survive the lockdown, but I liked those places, and I liked being able to knit them into the book. And I don’t know if I’ll have to unravel them and find new locations.

When I wrote The Stone War I started writing it in the early 1990s. It was published in 1999. It took place in the unimaginably distant near future: 2019. I wrote about neighborhoods and occasionally landmarks like the NY Public Library or Grand Central Terminal, not worrying about how the city would change in ten years because that change–and loving what is eternal about the city was part of what the story was about. Something terrible hits the city, and people need to find away to survive, and there you go.

But one of the things I did was to cause a lot of destruction. I name-checked Grand Central and the Public Library and the Flatiron Building where I used to work, and in passing I mentioned that the World Trade Center buildings had been knocked over into NY Harbor. (Yes, I understand with the steel underpinnings of those buildings it’s not possible, but that was the point). And then, only a clear, gorgeous September morning, 9/11 happened. A landscape I had dealt with as settled had suddenly, irreparably, been defaced.

The pandemic has dealt a lot of blows to businesses–restaurants, venues, theaters, hotels, museums. I hope they survive, all of them. But as a writer, setting something in the real world, there’s a chance that that location may be whisked out from under you. Because cities–and all places humans dwell–are palimpsests.