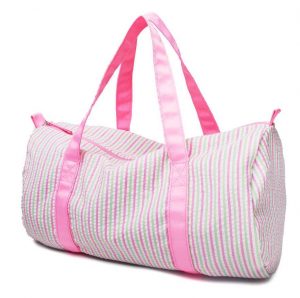 When I was a kid we went from our home in New York City to our work-in-progress barn in Massachusetts virtually every weekend. Among other things, this meant that my brother and I got very good at packing. My father had a system for packing, which meant we had packing lessons and were supervised by my father until he was certain that we could be trusted to follow the protocol. All clothes were to be folded and then rolled into neat tubes which could then be stacked in our brightly colored duffels (mine pink, my brother’s, blue). This allowed one to pack an extraordinary amount of stuff–far more than one generally needed for a two-day weekend.

In addition to the duffels, routine weekend luggage included my parents’ suitcase, whatever luggage weekend guests were bringing, and an object that we called the Meat Bag. The Meat Bag was an insulated red plastic bag in which perishables like meat, milk, and eggs were transported back and forth. It was our single most recognizable item of luggage, as my brother had used a permanent marker to draw superhero comics all over it.

My ninth birthday fell on a Friday, and I was given my presents that morning, in case I wanted to bring any of my gifts with me to the Barn. I remember packing Stuart Little, the cast album of Showboat, and an olive green hand-knit pullover sweater, and putting my duffel with the other bags to go into the car. Then, because it was an unusually nice afternoon for December, I went to sit on the steps of our house, watching my father pack the station wagon: both duffels, my parents’ suitcase, the luggage of that weekend’s guest, and the red Meat Bag. Dad went back into the house, telling me in that way that adults do, “Keep an eye on the car.” Which I did not, because the car was not doing anything interesting.

At some point I noticed a couple unpacking a station wagon. They removed a pair of suitcases, two brightly colored duffels… but it wasn’t until they unloaded the Meat Bag that I realized this was not just any station wagon. These strangers were taking our stuff. I tore inside to tell my father, who gave chase down the block, across 5th Avenue, and on for three blocks before he lost them. I can still recall what the thieves looked like: mid-30s, both of them medium height, white, dark haired and sharp featured. She wore a canvas car coat and a flowered scarf; he wore a tweed sports jacket. They looked completely ordinary, like people who would be unpacking a station wagon at 4pm on a Friday.

We went to the police station where Dad made a report; after that we headed to Massachusetts in our much-emptier-than-usual station wagon, and spent part of the weekend buying replacement meat and milk and underwear, in addition to the usual Barn activities. Gradually my father’s ire over the theft was overtaken by his sense of the absurd. We had lost our weekend clothes and some incidentals. But what about the thieves who had outrun him? Dad was gleeful, imagining them discovering that their haul comprised our grubby clothes, our guest’s Bible, and one good steak. Not exactly the Great Train Robbery.

Thereafter my father double-checked when he locked the station wagon. And when I was instructed to watch the car, I did.

_____
* Unfortunately, my father was more interested in the how of packing than the what. For the first year that we were left in charge of packing for ourselves, this meant we might arrive Massachusetts with a dozen pairs of underwear, two pairs of jeans, one sock and no shirts. Experience sorted us out, eventually.

2 thoughts on “Raised in a Barn: A Heist”