I’ve been here at Casarboles (Treehouse) in Ponce, Puerto Rico, a week and a half now, and it’s amazing how little I feel I have accomplished, despite feeling that I’ve done nothing but work. How can that be? All those trips to Home Depot, all that hardware purchased and wrestled around, all those damp, pressure-treated two-by-fours carried home in the little Kia rental car to be laid out in the sun to dry. Surely that counts for something. 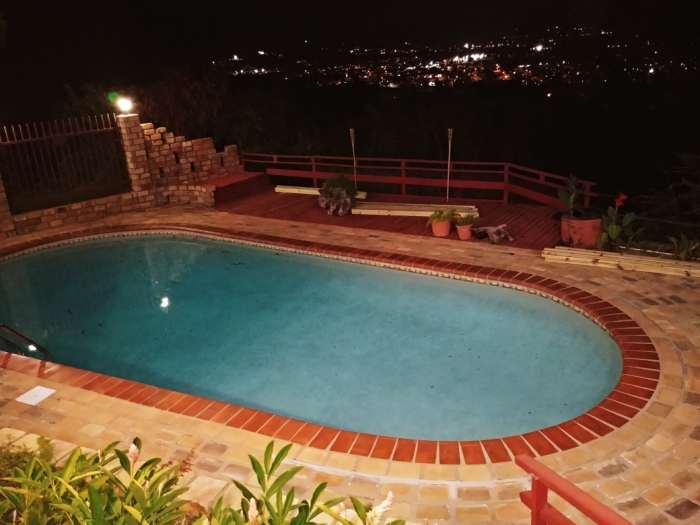 What you can’t see in the picture is that the whole thing needs to be replaced. Not the steel supports that Allysen’s dad built—they’re still solid—but all the decking, and all the railing. Since we can’t get anyone in our time frame to work on it, I’m afraid it’s my job. Hence all the two-by-fours. (Yes, I know I could order them and have them delivered, but I need to hand-select them to weed out all the warped, knotty, and split ones. Because they’re going to be decking and railing.) By the way, have you checked the price of lumber lately?! Anyway, that, I thought, would be my first big job. Except…

Exhibit 2: Jayce—in a laudable fit of cleaning and inspecting while she was here—discovered that the AC to the master bedroom was full of mold and ready for the junk heap. Well, no problem, I said, we’ll just replace it. Except that it wasn’t installed in a window. I had to chisel it, literally, out of a wall. 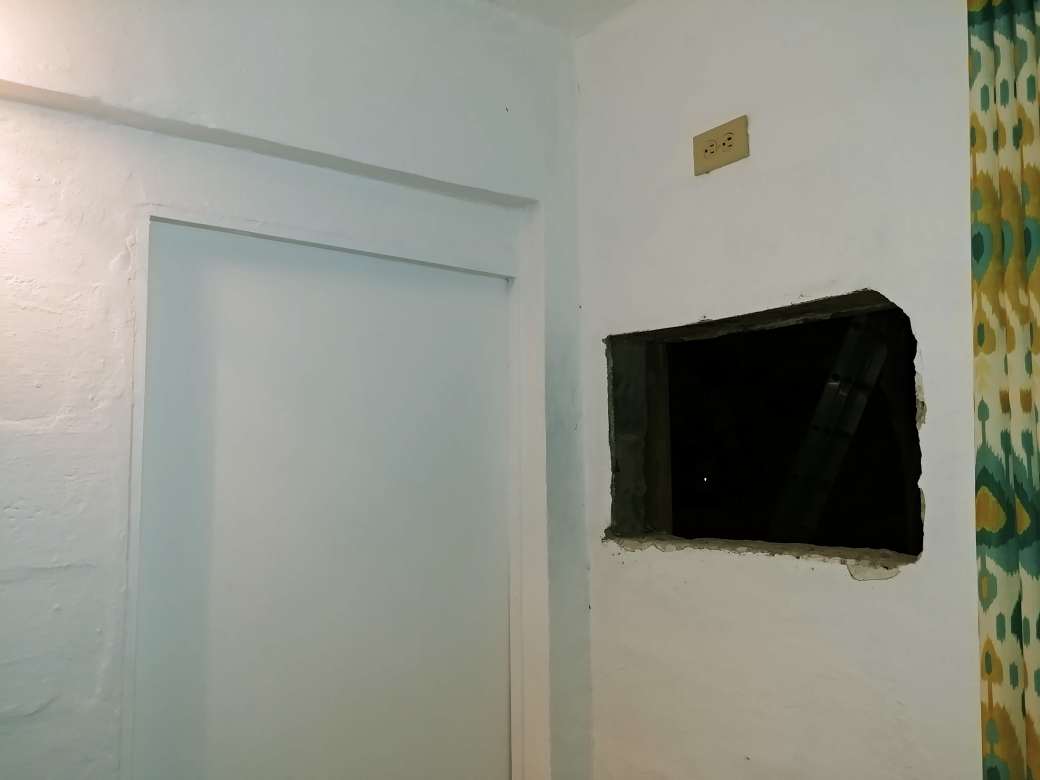 And then repair and build a new framework in the wall to hold the new, smaller unit. 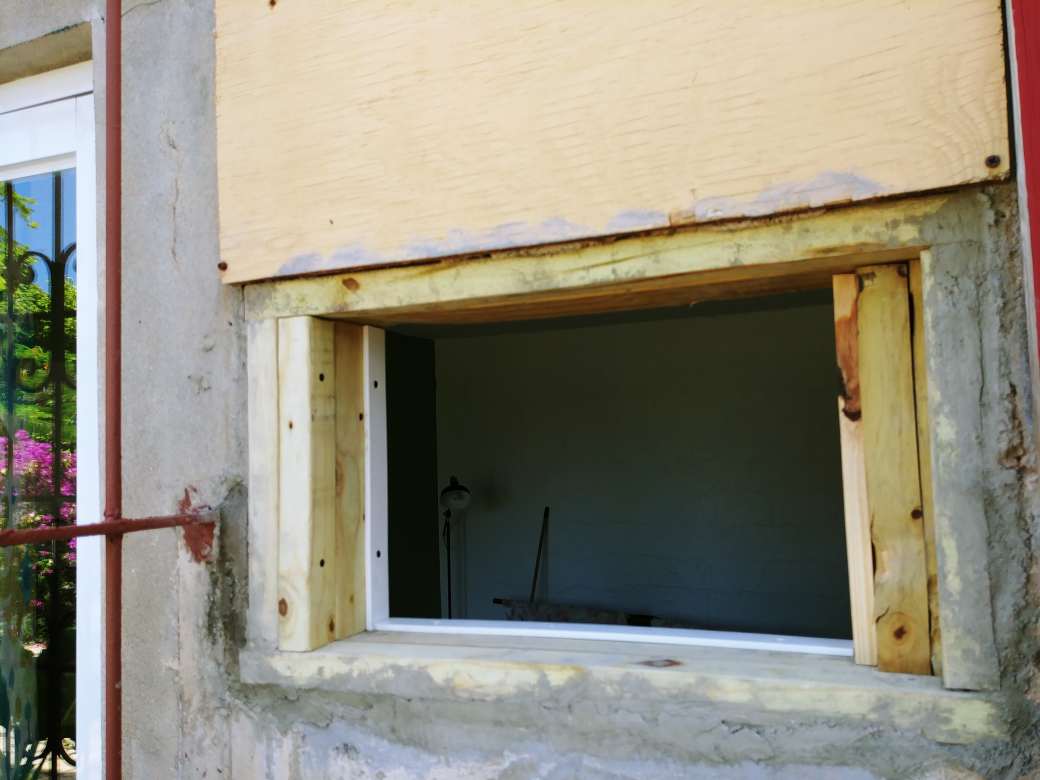 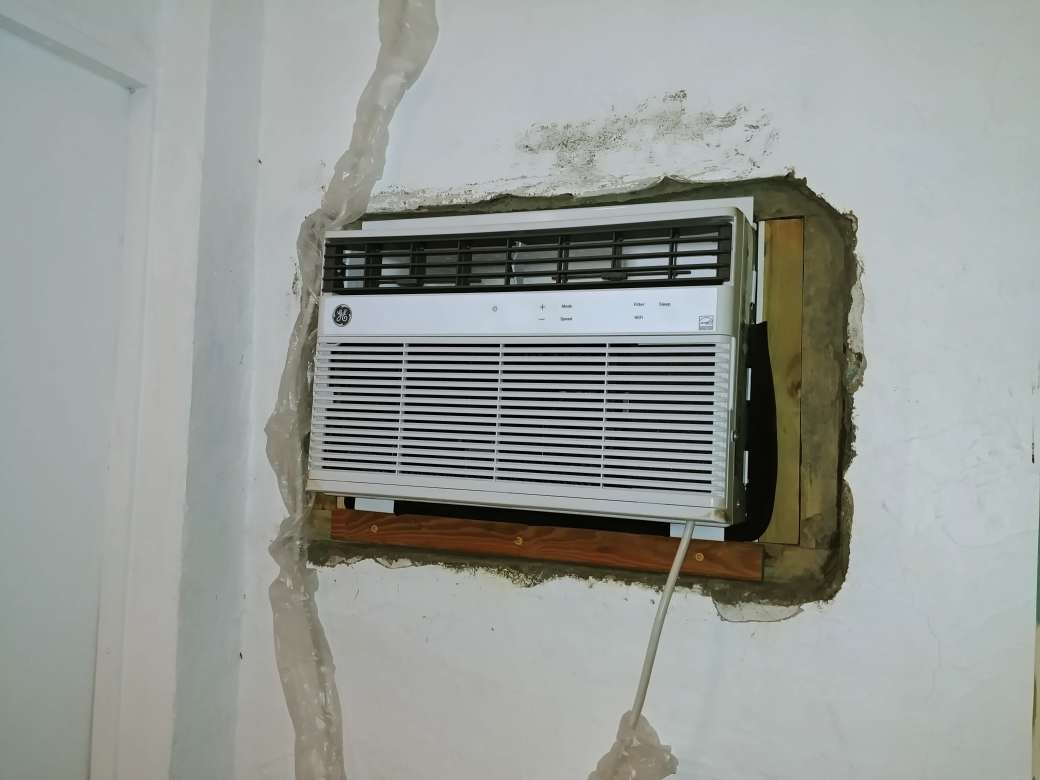 And then trim it all off so it looks good. Days later, I’m finished with the first two parts, just starting on the trim. To be followed by paint. Soon, I hope, we’ll be able to move into the room. If it sounds like I know what I’m doing or am particularly good at any of this, well, remember that I’m a fiction writer. One step up from a grifter.

Amidst this, my brain has been hard at work trying to figure out how to rebuild the pool pump cover, which was badly designed and has warped and fallen apart. And the once-solid gate to the “back forty,” which now solidly thunks on your feet when you try to lift it aside from where it’s propped because it fell off its hinges last year. Or how to set up a gauge and alarm on our water cisterns, which are just big, dumb black plastic tanks.

Yes, the city water went off for about two days, due to electrical problems involving the no-doubt ancient pumps pushing water up the hill. Our cisterns kept us supplied, but only barely, owing to the fact that the way one discovers that the water is off is when your cisterns run dry. In this case, it was Frances next door who ran out first and alerted us. Usually, it’s the reverse. Well, at least we had the pool to shower in. But the water’s back on now, and the tanks are full. (For now!)

During all of this, Allysen has continued to work her regular job during the day, remotely just as she did from home. She does her part on the house around the edges of that work, on the domestic side of things.

Much of what we’re doing would be necessary anyway, but are really necessary if we’re to keep renting the place.

Let’s close with a nice picture. Here’s Jayce and Allysen on the outdoor terrace of the Vistas restaurant. 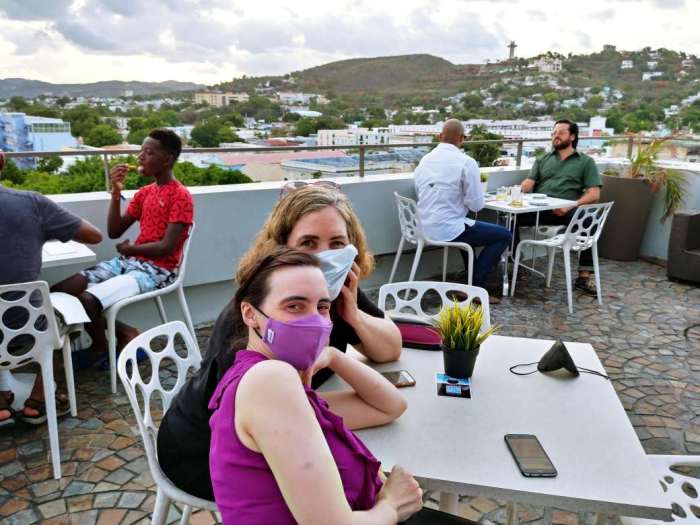 See that little (giant) cross up on the top of the hill? Our house is a smidge to the right of it. The best view of the ocean and the coast comes just as you are driving down the hill past La Cruceta (the cross).