Yes, those two things are related.  And I am here to tell you that writing a book, maintaining a Patreon, holding down a part-time office gig, dealing with a pandemic, fighting for democracy AND housebreaking a puppy is exhausting.

But – as everyone expected – I foster-failed, and now the household of two has officially and legally become a household of three. The puppy is four months old and (mostly) housebroken, and Castiel the Cat has learned that if he hisses and swats at her nose, she will stop trying to Make Him Love Her.  So all is well, and I can get back to writing and righting all the wrongs, right?

But I’ve noticed something interesting, as I go about my new, somewhat chaotic routine.

I’m an introvert. But  now I am an introvert-with-dog, and nobody warned me how much that would change….everything.  I have to take the dog outside upwards of six times a day, making the short walk to the park next door, or around the block, or sometimes to the “puppy pen” at the nearby dog park.  And Maxi is a friendly creature, who thinks everyone exists to a) play with or b) pet her.

So now I am known by nearly everyone within a three block radius as “Maxi’s mom.”   We have dog-friends we must say hello to, when we’re on the street at the same time.  We have human-friends we exchange greetings with, all of whom need to remark on how much Maxi has grown (she’s gone from 8 pounds to 19 pounds, seemingly overnight and most of it leg).  In the middle of a pandemic, I know more people to actually talk with than I ever met in two years living at my previous address.

More, I belong to several Facebook groups for training and enrichment of said dog, plus the foster-and-volunteer group for the shelter I got her from.  And I talk regularly with my dog-owning friends, like anyone suddenly handed a small new life and told good luck and godspeed, desperate for advice and reassurances that I’m not doing it wrong. 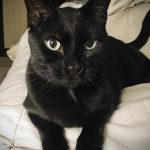 The cat is horrified.

Meanwhile, in another personal departure,  because the dog wakes up at 6 and requires walks and training and feeding and then another walk and then exercise, and some more training, my usual writing routine, which went from 6am to noon, is kaput.  I can only sit down uninterrupted at the computer when she goes down for the night, somewhere around 7pm.  Which means I’ve become a nighttime writer.  Which means I’m getting less sleep, which means I’m still exhausted.  And writing slower, which brings us back around to my opening apology.

The cat is actually okay with this change, as he keeps me company while she snores in her crate.

One thought on “Who Am I and What Have I Done with Me?”